“Take a deep breath and enjoy it, and then head over to Rolling Hills and get the bathysphere.”
― Atlas[src]

Rolling Hills was another place for the citizens of Rapture to relax and enjoy the serenity of the verdant park. As the name suggests, the Rolling Hills' common feature is the smooth hilly landscape. Along with the amazing canopy and foliage on show, this made it one of the best places to have a walk in the "woods" of Rapture.

This level of Rolling Hills resembles a small forest with natural, uneven terrain giving the area its name. Positioned under an awning is a Grenade Launcher Turret which is able to fire upon Jack almost as soon as he walks in. The walls are made of stone and wooden beams. Unlike other places in Arcadia, the ceiling is made of glass with a view of the sea, instead of being painted to resemble the sky. Much of the light coming from the ceiling is blocked by the canopy of leaves, immersing visitors in the forest. The left wall can be climbed to reach several dollars and an EVE Hypo. A waterfall flows on the far wall which can be traversed to gain pistol bullets, an EVE Hypo, and an Automatic Hack Tool. To the right of this is a Bot Shutdown Panel. Near the stairs leading to Lower Rolling Hills is a bench on which lies the Audio Diary Shouldn't Have Come. Also in this area is a cave overgrown with vegetation.

Going down the short flight of stone stairs brings you to this lower level. To the left is another overgrown cave. Near the Langford Research Laboratories entrance is a Little Sister Vent, and a tank of liquid nitrogen lies on a ledge near the exit to the Rapture Metro.

Upon entering the main area of the Lower Rolling Hills, Andrew Ryan releases a deadly poison, killing most of the plant life. Not only does this make Rolling Hills' plant life sparse, but it reveals a number of hidden Saturnine figurines and writings. In addition to these, the hidden caves are now enterable as a result of the herbicide.

Once Ryan's poison is released, these caves open up. The entrances to both caves are marked by two straw figurines which are set aflame. The cave in Lower Lolling Hills has waist-deep water and a sole Saturnine cultist. On the ground near the entrance of the cave lies the Audio Diary The Saturnine. At the end of the cave is a stone altar on which offertory objects such as pumpkins, liquor, and blood have been placed for use in rituals. The cave in Upper Rolling Hills is mostly the same, except it includes a large wall of Saturnine writing, and ankle-deep water. 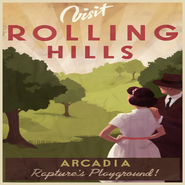 An Advertisement for Rolling Hills, seen in BioShock 2 Multiplayer.
Add an image to this gallery

Retrieved from "https://bioshock.fandom.com/wiki/Rolling_Hills?oldid=322763"
Community content is available under CC-BY-SA unless otherwise noted.