The Splicer model "Rosebud" is a female worker frantically looking for her lost child, who might have been taken to be made into a Little Sister. She cries out to her child, or for her child not to be taken from her, when she is not singing a broken version of Amazing Grace. Rosebud is positively ruthless and quite deceptive by often setting traps. She also frequently refers to the player as "monster." She speaks with a slight Eastern European accent.

If Another Splicer Attacks the Player[]

When the Player Runs[]

Rosebud wears an industrial jumpsuit suited to a number of different occupations such as a factory worker, dock worker, engineer, scientist, postal clerk, janitor, etc. She has auburn hair and green eyes. Due to the effects of Splicing and the Civil War, Rosebud is the most mutated Splicer model in the first game, with one side of her face horribly consumed by a roseate tumor, from which she likely gets her name. Her arms are covered in lesions and razor marks. In addition to her suit, she wears a pair of worker's gloves and boots. She appears to not be wearing a bra. Rosebud can wear a welding mask or goggles as accessories.

Model 1: The primary model wears a turquoise jumpsuit, dark boots, and blackish-brown gloves. She has teal flecks all over her clothes and in her hair and her makeup is running.

Model 2: This model wears a light blue jumpsuit, bluish boots, and buff colored gloves. Her clothes are splattered and scratched in either dried blood, rust, or soil and she has blood all over her mouth.

Model 3: This model wears a light blue jumpsuit with navy pinstripes, black boots, and white gloves. The legs of her suit and boots are covered in green and brown grime and she has blood running from her mouth and nose. 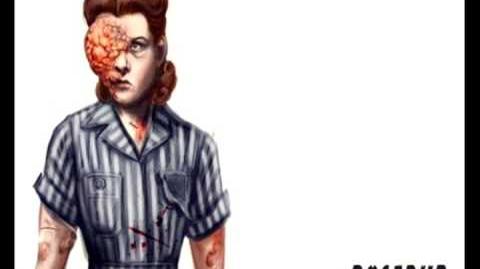 Dialogue for Rosebud in BioShock. 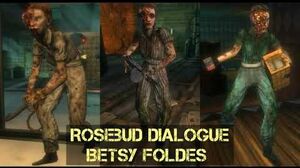 More dialogue from Rosebud in BioShock. 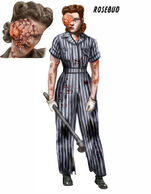 The original concept sketch for Rosebud.

A Rosebud Splicer encountered in BioShock.

A Rosebud in Neptune's Bounty.

A Leadhead Rosebud with a machine gun.