The Rosie is one of the five functional types of Big Daddies in Rapture, along with the Bouncer, the Rumbler, the Alpha Series, and the Lancer. Along with being assigned to protect Little Sisters, Rosies are also the supplementary mechanics and maintenance workers of Rapture. Their main weapon is a giant Rivet Gun. They are taller and slower moving than the Bouncer, making them less agile, but their long-range gun makes them just as dangerous.

During the opening level of BioShock, a Rosie is briefly seen doing electrical work in a connection tunnel. The regular Rosies appear in Neptune's Bounty, Arcadia, and Farmer's Market. Starting in Olympus Heights, the player will encounter Elite Rosies, which are significantly more powerful than their original counterparts, and with 50% more health. Elites also appear in Apollo Square and Point Prometheus. The Elite Rosie has a large, red collar. A collarless Elite Rosie corpse can be found in the left storage room of a restaurant in the Farmer's Market. One is seen briefly in the Proving Grounds in a scripted fight with a Splicer, where it is crushed and killed by an overhanging skeleton of a whale.

The Rosie, like the other Big Daddy types, has three "moods" that may occur when the player encounters them. These moods appear as the color of the portholes on the Rosie's helmet.

When in combat, the Rosie will produce three different kinds of attack:

By the end of the alarm, the Big Daddy will be either severely weakened or dead, without the player risking themselves at any point. Note: This strategy is more effective on Bouncers as they cannot destroy Security Bots unless they stray too low.

When Jack finally confronts Frank Fontaine in Point Prometheus, Fontaine barricades himself and escapes to the Proving Grounds and later, his personal lair. In order to chase Fontaine down, Jack is forced to don a Big Daddy suit and undergo modifications that trick Little Sisters into thinking he is one of their protectors, making them open the doors in the path to Fontaine.

Jack is required to equip a helmet, a bodysuit and a pair of boots. Despite the fact that all functioning Big Daddies in the level are Elite Rosies, the only bodysuits which are available belong to the normal Rosie model, so Jack has no choice but to wear those. He also performs an automated vocal cord surgery and applies three pheromone samples on himself, making him both sound and smell like a real Big Daddy. After that, Jack enters the Proving Grounds with the help of a Little Sister (or multiple Little Sisters, if the initial one is killed), protects her when she gathers ADAM in the area, and eventually reaches Fontaine's lair.

Jack's transformation into a Rosie is not complete, however, as he does not have his skin and organs grafted into the suit and he is able to take off the helmet after entering Fontaine's lair. Jack never wears the Rosie's gloves, and he is never given the strength to pick up the Rivet Gun either. The process gives him an extra resistance to damage, though. Wearing the Rosie suit also causes Splicers and enemy Security Devices to ignore him unless provoked.

Increased Drill damage to all enemies

Rosies return as an enemy in BioShock 2. In the single player campaign, it has exactly the same traits as in the original game. Rosies in BioShock 2 have a slightly altered appearance. Whereas their diving suits were a bright orange in the original, they look duller and dirtier in the sequel, as the suit has worn down over time. Rosies are only encountered in Pauper's Drop. Before then, a Rosie is seen on the seafloor outside of Adonis Luxury Resort riveting a leaking window, repairing it in the process. Only regular Rosies appear in BioShock 2.

In multiplayer, a player can pick up a Big Daddy Suit to play as a Rosie for one life. The weapon wielded by the player is the Rosie's Rivet Gun. It has infinite ammo, but firing continuously for too long will cause the rivet gun to overheat. A quick-melee attack can be performed with the rivet gun. The player also has access to two other Rosie abilities:

Rosies only have two different "moods" in multiplayer, indicated by the light emanating from their portholes:

If Playing as a Rosie[]

If Fighting a Rosie[]

In Burial at Sea - Episode 1, a Need to Know Theater production entitled "The Big Daddy" shows footage of a Rosie fixing a leaking window. This clip is actually of the first Rosie seen in BioShock 2, fixing a window in the Adonis Luxury Resort.

In Episode 2, Elizabeth can witness a vision of a Rosie and a Little Sister walking together in Neptune's Bounty by examining a Little Sister's Orphanage poster outside Bathyspheres DeLuxe, and the same vision is seen during the episode's ending. The sight of the Rosie and Little Sister is reused from BioShock. 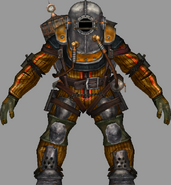 A Rosie, as seen in BioShock. 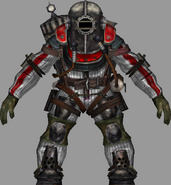 A collarless Elite Rosie, as seen in BioShock. 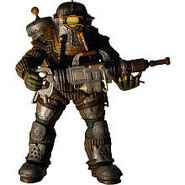 Components of a Rosie's suit.

A Rosie fixing the tunnel.

A Rosie walking in the ocean.

The corpse of a Rosie in Neptune's Bounty.

A Rosie attacked by a Nitro Splicer.

A Rosie moving a Little Sister to a safe position.

A Rosie firing its rivet gun.

A Rosie warning the player.

A Rosie bringing a Little Sister from a vent.

A Rosie helping a Little Sister get into a vent.

A Rosie throwing a proximity mine.

The corpse of an Elite Rosie in Point Prometheus.

An Elite Rosie pushing back the player.

An Elite Rosie stretching its hand to a Little Sister.

An Elite Rosie crushed by the whale skeleton. 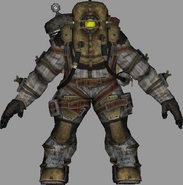 The Rosie Suit, as seen in BioShock 2 Multiplayer.

Promotional image of a Rosie guarding a Little Sister.

A lone Rosie wandering through Arcadia.

A Rosie defending a Little Sister.

A Rosie in concept form.

A Rosie comforting a Little Sister.

The player fighting a Rosie in an early version of Neptune's Bounty. 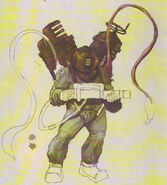 Early concept art for the Protector, developed into the Rosie by Nate Wells.

An early concept for the Rosie by Shawn Robertson. 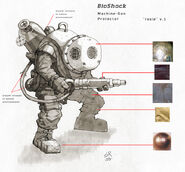 Concept art for the Rosie.

Concept Art for a Deco-Rosie, as seen by Little Sisters.

Concept Art for an alternate Deco-Rosie, as seen by Little Sisters.