“…Ryan thought my vision was immature… "antiquated," he said. This place could have been something magical, but instead he turned it into a school… no, a cathedral. Dedicated to himself.”
― Carlson Fiddle[src]

Ryan Amusements is the third level in BioShock 2. Delta meets with his next ally and guide across Rapture, former savvy businessman Augustus Sinclair, but first they will need an Incinerate! Plasmid sold at the park to defrost the gate blocking their way to the next train station. This is also the first level in which Delta fights with a Big Daddy, adopts a Little Sister and gathers ADAM with her.

Ryan Amusements was a theme park built by Carlson Fiddle, intended to teach Andrew Ryan's philosophy to the youth of Rapture. Ryan realized after completion of the city that children, whether they immigrated to or were born in the city, might someday wish to leave Rapture seeking the surface world. Seeing that this would compromise Rapture's secrecy, he had a number of experts and consultants, the animatronics engineer Carlson Fiddle, Ryan's propaganda artist Sander Cohen and the psychiatrist Dr. Sofia Lamb, help design and build an educational theme park. Ryan incorporated his ideals into a ride known as "Journey to the Surface". Shown were the triumphs of Rapture and the injustices of the surface, to convince children that The Surface was a place unfit for them. After the park's opening, Lamb and Fiddle feared that it was nothing more than a shrine dedicated to Ryan himself. This conflicting view resulted in Lamb's resignation from Ryan's employment, and the latter's first grief with the psychiatrist. Along with the ride, Ryan Amusements featured the Rapture Memorial Museum dedicated to the foundation of the city, the Hall of the Future where Plasmids were demonstrated and sold to visitors, the El Dorado Lounge where they could restore themselves while enjoying a show, and a gift shop. Promotional Gene Tonics were also offered to visitors at the park's entry.

Ryan Amusements continued to be a popular destination up until the 1958 New Year's Eve Riots. On the night of the celebrations, Nina Carnegie volunteered to chaperon a third grade class field trip and sleepover at the park. In the chaos which followed the riots, the power was shut down and the place cut off from the rest of Rapture. The adults trapped inside did what they could to care for the children and supply them with the remaining resources available, but many, including Nina herself, eventually starved to death. Among them was Carlson Fiddle, who locked himself in the repair room of the ride after gathering supplies for himself, and sought to escape in a maintenance Bathysphere. He died before he could put his plan into action.

Later, power was restored and the park complex was again accessible, eventually to be inhabited by Splicers from the Rapture Family. Sinclair established his own refuge there and came into contact with Dr. Tenenbaum to plan the fall of Sofia Lamb's reign, and Delta's reunion with his Little Sister, Eleanor.

The Atlantic Express Station, which served as the parks only entrance is large and surprisingly sparse. The large windows on either side of the room provide views of the neighboring buildings, though its hard to tell if any have collapsed over the years. Sinclair has been using a small maintenance room as a shelter, which the player can only access once Sinclair has entered the train.

Up the stairway is a small seating area which has been turned into a place to sleep, likely by someone who became trapped in the park all those years ago. Up another flight of stairs leads to the main park entrance.

Before guests could enter Ryan Amusements, they had to pass through the the Park Entrance and buy their tickets. There are lockers, a few benches, and news kiosks for customers waiting for their train or to get into the park. The room has access to the Atlantic Express Train Station and to Security Wing beyond the ticket counters.

The large overhead clock has collapsed from the ceiling into a large pile at the center of the room, And the parks sign is now starting to tilt thanks to a slanting support column.

To acces the park, Delta needs to find a ticket to get through the main door, so he heads for the Security Wing. He has no luck with finding a ticket by the counters and goes further in to the employees only area and posits the ticket. The Security Wing was used by the staff of the park as a surveillance station, locker room, weapon storage, lounge, and office.

The two-story Rapture Museum serves as the main hub of Ryan Amusements connecting most of the different areas. Its five audio-visual exhibits show a stylized history of Andrew Ryan founding Rapture, and the building of the underwater city. All but one of the exhibits have survived the decade since the park went out of service.

The El Dorado Lounge was a small bar and cafe with a stage where visitors could have a meal during a break in exploring the attractions of the theme park. Here, the player will find the Drill Power Tonic in its entry hall, and the first Big Daddy and Little Sister.

Hall of the Future[]

Hall of the Future was an exhibit where visitors could observe the newest inventions and test the powers of Plasmids. Here the player will find two Gatherer's Gardens. One holds the Incinerate! Plasmid, which Delta must use to unfreeze the blocked door in Atlantic Express train station. Hall of the Future also features a smaller exhibit which is blocked by ice called "Kitchen of Tomorrow". The player can reach the second Gatherer's garden inside it by melting the ice with Incinerate! which leads to a room advertising the Winter blast Plasmid via a house wife having a problem in her kitchen.

The gift shop of Ryan Amusements is a tacky store where tourists can buy candy, drinks, cards, toys and dolls. The entryway of the shop features a shoe shine station and a small bar. One wall of the shop is a window showing a panorama of the city. Some of the inventory of the shop is low quality since the manager, Silas Bantam, made a deal with Augustus Sinclair to increase profit by using cheap labor in Pauper's Drop. The Gift Shop contains the only restrooms in the amusement park and an Epstein the Swami fortune teller machine.

Journey to the Surface[]

Journey to the Surface is the main attraction in the theme park. It is presented as an imaginary ascension to the surface world, showing all the horrors awaiting anyone who would wish to leave Rapture. The journey is outlined by hellish neon flames, and to the sides of the ride the viewer can see various wax and mechanical puppet displays condemning the surface world and its politics and society. Interspersed with these exhibits are mechanical puppets of Andrew Ryan lecturing on the evil of the Parasites on the surface. 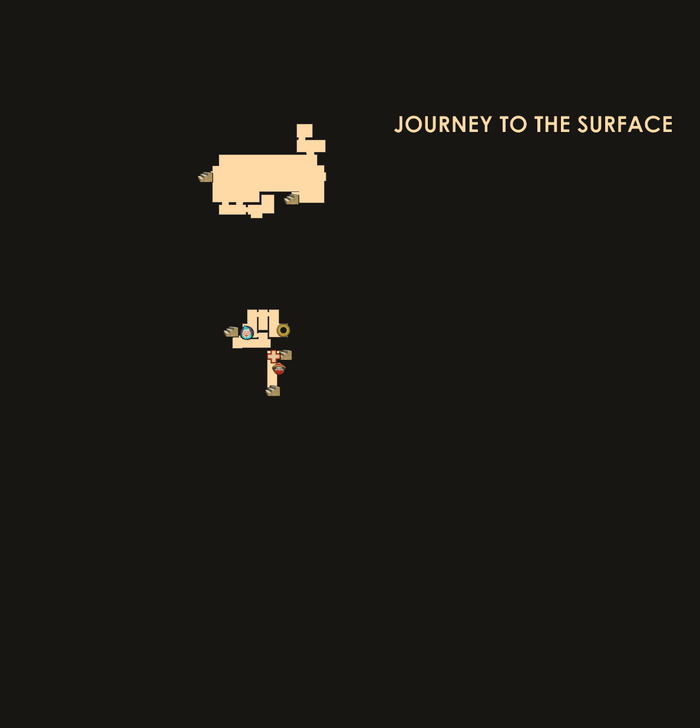 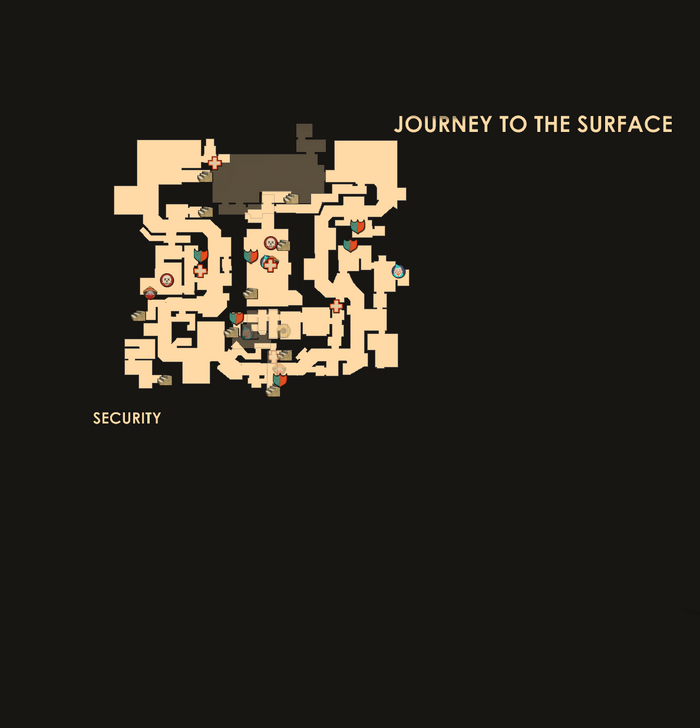 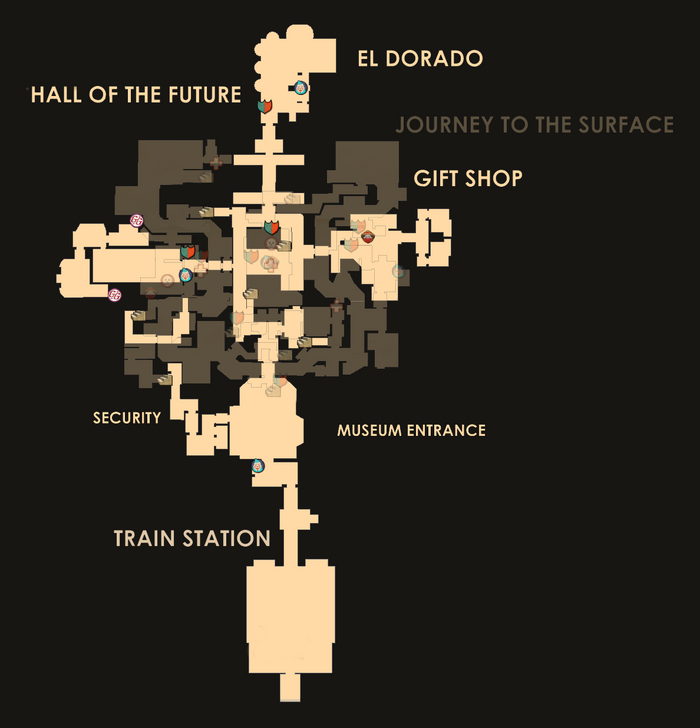 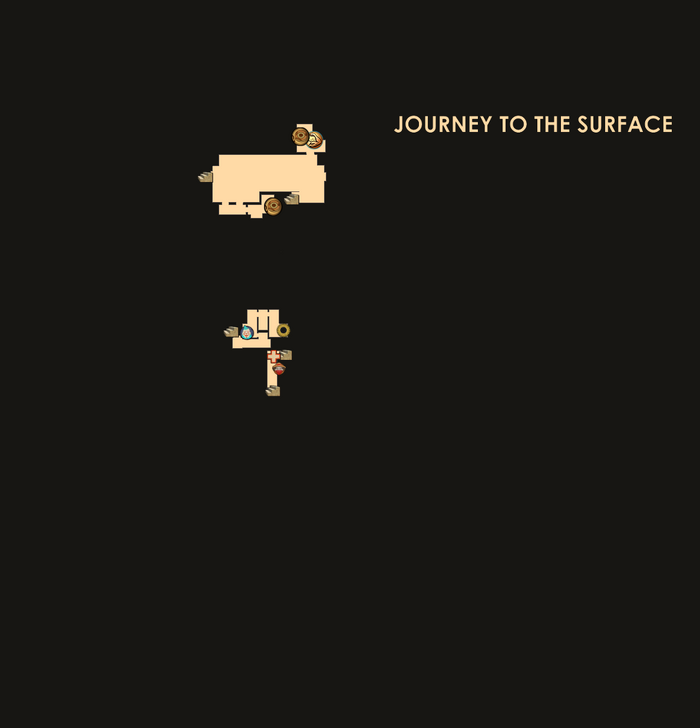 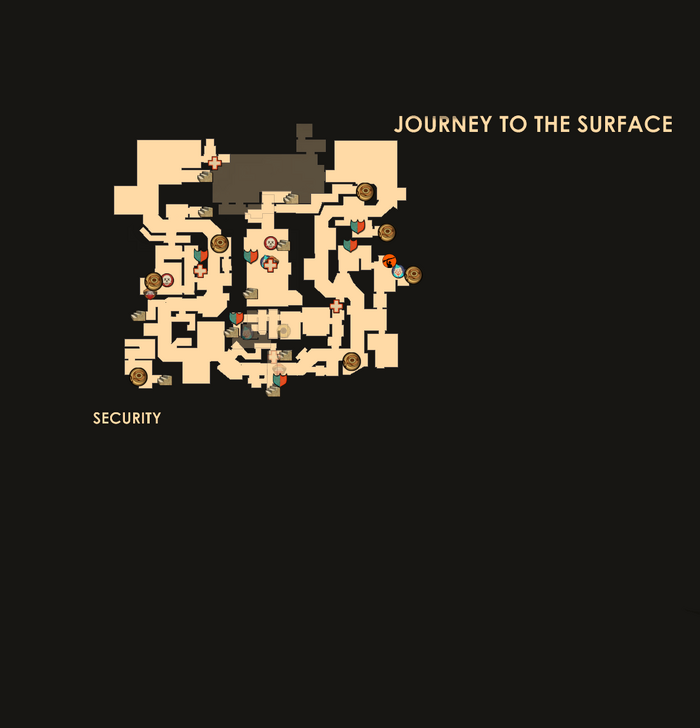 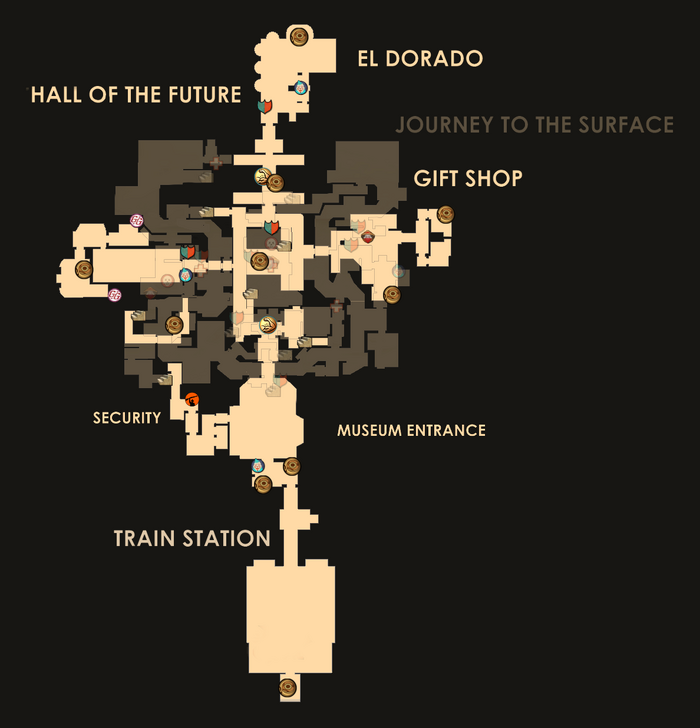 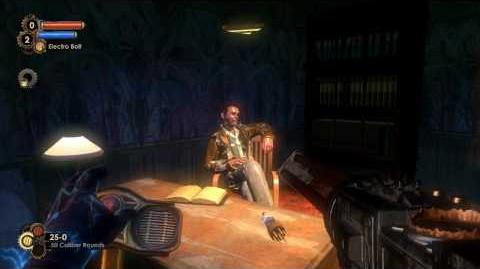 From the desk of Andrew Ryan. 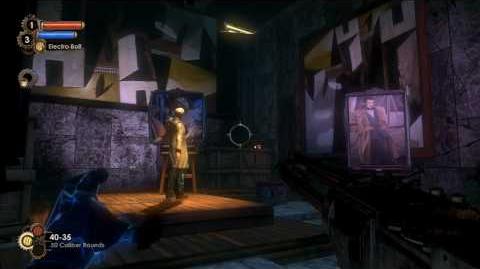 The Parasites say "No!"

Concept art for the doors of Ryan Amusements, by Devin St.Clair.

Concept sketch for one of the dioramas of the Rapture Memorial Museum.

The hands of "the Parasite."

The entryway of the Rapture Memorial Museum.

Behind the walls of the ride, workshops supplied various spare parts for the figures.

Closeup of the child figure at the end of Journey to the Surface.

Behind the counter in the Security Wing.

The small lounge in the Security Wing.

The Machine Gun behind protection glass.