“What sharks do for the ocean, these men do for Rapture.”
― Andrew Ryan[src]

Ryan Security is the private security force owned and operated by Ryan Industries to maintain order in Rapture.

Rapture was built around a principle of minimal government interference, "a city free of law and god." And so, while there was officially no state-run military or police force, for-profit enterprises which provided armed and unarmed security services and expertise to private and public clients were permitted. Andrew Ryan used his good name and substantial resources to create Ryan Security, the most prolific and effective of the private security services in his underwater city.

Led by Ryan's staunch ally, Chief of Security Sullivan, Ryan Security served many businesses and private interests. While the largest was Ryan Industries, the most important was the Rapture Central Council. Ryan Security was contracted to carry out the edicts of the City Council, and thus to maintain order and keep the city safe from potential threats. Whether Ryan or Chief Sullivan condoned or were even aware of it, various Ryan Security agents were engaged in splicing, due to the wonder drug ADAM enabling them to be more effective in carrying out their duties. As the dangerous effects of long-term plasmid usage were not yet publicly known, these indulgences were tolerated. Security Devices, such as Security Bots, Security Cameras, and automated Turrets, were also technologies and services offered and regulated by Ryan Private Security and by Ryan Industries as Home Defense Products.[1]

“Now look, I don't make the laws here, I just enforce them.”
― Sullivan, Chief of Security[src]

The greatest perceived threat to Rapture was the city's existence being exposed to the surface world. The City Council tasked Ryan Security with the job of uncovering a large smuggling ring in Rapture and bringing it to justice. Sullivan had his men infiltrated the operations at Neptune's Bounty and attempted to get sufficient legal proof. Ryan's men commandeered the Wharfmaster's Office to use as their base of operations while investigating the extent of the criminal enterprise. They used severe interrogation methods on suspected smugglers to try to link the Smuggling Ring to Fontaine.[2]

On September the 12th, under the orders of Andrew Ryan and the rest of the Rapture Central Council, Ryan Security raided Fontaine Fisheries, killing Frank Fontaine and major elements of his gang in a firefight when arrests were attempted. The smuggling operation was shut down and evidence of the smuggling seized. The security operation was seen as a success, but because the target was Andrew Ryan's biggest business rival, it led many of Rapture's population to view Ryan as despotic and Ryan Security as his private enforcers.

The growing animosity and distrust in Rapture allowed for a charismatic, populist leader named Atlas to rise to some prominence. He organized a following inside Fontaine's, where he and other associates of Frank Fontaine had been imprisoned following the raid on the Fisheries. He used telegraphs to transmit his anti-Ryan agenda to collaborators out in the city, who then organized supporters among the lower classes.

Fearing the potential for an uprising, Andrew Ryan authorized Operation Deep Dive on New Year's Eve of 1958. He sent his forces to the department store to stomp out the growing security situation before it got out of hand. As a last-minute addition, the agents were ordered to hunt down and eliminate Elizabeth, who Ryan saw as a threat, and bring her body to Dr. Yi Suchong for scientific study. Ryan Security killed many of Atlas' men, but the raid was a failure as Atlas managed to escape into the city.

“Stead he's just splicing his mob up, giving them more and tougher Plasmids. There's an arms race on here in Rapture.”
― Bill McDonagh[src]

With Atlas free in Rapture, Ryan became increasingly desperate to find the revolutionary and his compatriots. He had his men restrict and track citizen's actions in an attempt to corner Atlas. This was accomplished through various means including infiltrating the Air-Tite Archives in Minerva's Den to investigating people's private records.[3][4]  In an attempt to restore order, Ryan imposed laws which limited the terrorists, but also restricted the citizenry. Eventually, laws against public congregations and strict curfews went into effect. Apollo Square, a concentration of Atlas supporters, was locked down and put under martial law with Ryan posting Security personnel to guard checkpoints. There, guiltless Rapture citizens were interred alongside Atlas loyalists and other lawbreakers. By this time, what had started as a minimalist security force had grown into Ryan's private army, enforcing the harsh order of the police state Rapture had become.

As the civil war worsened, more and more Ryan Security personnel began to "splice up" to compete with Atlas' Splicers. This only served to further destabilize the situation. By the time of Jack's arrival into Rapture in 1960, the agents of Ryan Security are just as unstable as the rest of the city's inhabitants under Ryan's control.[5]

After rejecting Ryan's offer to work for him, Elizabeth is forced to fight agents of Ryan Security as she attempts to escape the Housewares building in Fontaine’s Department Store.

The agents of Ryan Security sent to Fontaine's for Operation Deep Dive can also be seen battling with the spliced-up prisoners, as Elizabeth makes her way across Bathyspheres DeLuxe, and executing followers of Atlas in the Manta Ray Lounge.

Ryan Security personnel are formally seen only in Burial at Sea - Episode 2. The following are the two enemy types encountered in-game:

These are the backbone of Ryan's forces in Rapture. They appear to be spliced, evidenced by their physical appearance, though significantly less compared to the Splicers inhabiting Fontaine's. Their combat behavior is also identical to that of Leadhead and Thuggish Splicers. Many carry pistols and shotguns, as well as crossbows and batons. Their general attire is a grey trench coat, and some members wear gas masks, which render them impervious to Gas Bolts.

These Splicers release fireballs, which are the same as the Houdini Splicers, but are used in the Firemen tactic of creating an omnidirectional explosion of fire when enemies are close. They use the Houdini Plasmid to appear suddenly and send out fireballs before just as suddenly disappearing. They are impervious to the Possession Plasmid and have increased defenses, making them a formidable enemy, but are not impervious to stealth blows. The Ryan Security Houdinis require hits with multiple Tranquilizer Bolts to be affected.

The following are quotes heard in Burial at Sea - Episode 2. Ryan Security Splicers oscillate between various models, but there are four unique sets of quotes attached to common security agents and one for Houdini Splicers. The name of the source audio file is listed, when known. 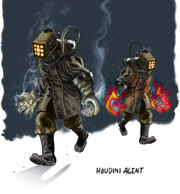 Concept art for the Houdini variant.