“Hello children. I am Ryan the Lion. I'm here to tell you about Peter the Parasite…”
― Andrew Ryan[src]

Ryan the Lion Preparatory Academy was a preschool and daycare center located in Fontaine's Housewares building of Rapture. The facility was filled with propaganda to indoctrinate children to Andrew Ryan's objectivist philosophies. It has advertisements and educational videos featuring the mascots Ryan the Lion and Peter the Parasite.

Ryan Industries bought up retail space in Fontaine's and the Academy was founded. Similar to Ryan Amusements, Ryan the Lion Preparatory Academy worked to persuade children of the evils of altruism and the benefits of independence and self-interest. The facility was a popular resource for parents who didn't want to be kept from having a career because of their young children. Others simply dropped off their kids while they enjoyed a carefree day of shopping at the department store.

The facility's methods of childcare were rather draconian. While children viewed as responsible were praised with their names being listed on the wall as "Ryan's Lions of the Week," others were publicly shamed with their names appearing on a "Parasites" wall. Instructors were issued Crossbows with Tranquilizer Bolts to deal with rowdy children and were even encouraged to use Possession if necessary.

Elizabeth exits an air vent she climbed through after taking the elevator down from the Toys department and emerges in the rear hall of the academy. She knocks out a Splicer with the Air Grabber to access the rest of the school. She goes through a classroom and finds another Splicer trying to pick a lock. She knocks him out and grabs his lockpick. She manages to get the door open and continues to the next classroom. The door leading to the cafeteria is locked by a Crossbow jammed through the handles. Elizabeth obtains the crossbow and enters the cafeteria, which is now filled with three Splicers. After leaving the cafeteria, she enters the lobby and escapes.

The classrooms were where the children spent most of their time. There was plenty of space to play in and the rooms were decorated with a friendly jungle motif. In addition to the books, blocks, and other toys, different activities were set up in alcoves around the room to educate the children. In one corner, easels were set up for painting; the most recent art exercise was to draw a Parasite the children knew of.

The second classroom houses even more activities for the students. The center space plays educational shorts from a projector, narrated by Andrew Ryan. To the left is a block game that teaches mathematics. Blackboards in this classroom encouraged children to list off the evils of different "parasitic" concepts such as "communism" and "empathy." In between these boards sits a teddy bear, which will cause Elizabeth to see a vision of little girls drawing with crayons in a candle-lit space, if she examines it. An area in the rear has archery targets with Peter the Parasite serving as the mark.

Within the first classroom is a time-out area. When children didn't live up to the expectations of the academy, they were sent there and labeled as "Parasites." A stern-looking picture of Ryan the Lion adorns this small area. Sitting in the corner is a chair facing the wall with a "Dunce" cap on it. There is also a chalkboard with the words "I will not share my toys" written numerous times.

“It doesn't matter how you PLAY, it matters how you WIN!”
― Propaganda[src]

The children of the academy got their necessary exercise at the gymnasium. The facility housed a number of different equipment with varying degrees of difficulty. The centerpiece is a basketball court, but there were also mats set up for stretching exercises and a pair of steady rings for gymnastics.

The room is lit by ornamental wall sconces that Elizabeth can attach to using her Air Grabber. Cubby holes on the opposite wall hold both basketballs and regular beach balls. An air vent connecting the gym with the first classroom holds a box of Bon Bons, a Candy Bar, a bag of potato chips, and a couple of coins.

This is where the students ate their meals. The area contains several tables with seating for forty, a buffet, and a kitchen on fire. A large statue of Andrew Ryan holding a child's hand is the focal point of the room. Elizabeth encounters three Splicers in the room; two male, one female. The air vents and ornamental wall sconces in the lunchroom can be used to covertly take enemies out. Should Elizabeth enter the vent, she might notice that the room on the other side of the cafeteria is flooded and is just moments from flooding the vent and the rest of the cafeteria. Fortunately for her, this never happens.

There are four posters on the wall to the right of the entrance of Andrew Ryan, Brigid Tenenbaum, Sander Cohen and Yi Suchong labeled "The Heroes of Rapture." Dr. Tenenbaum's has been defaced. Suchong's has suffered water damage from a leak.

From this office, the facility's staff took care of the administrative work including charting the students' progress, signing regulars and newcomers in, managing the school's finances, and organizing lesson plans. A Hand Cannon is found on one of the desks.

The principal oversaw the academy's administration from his office. It appears that he also disciplined the children. A large crate of empty bottles of Possession is placed next to a chair along with a length of rope and a cane.

The academy's front entrance as well as waiting area. Parents would drop off and pick up their kids from this spot. Along the wall, Saorise Farley and Jimmy Ward are listed as the academy's "maker" and "taker" of the week, respectively.

Arithmetic for the Young.

The lunch menu along the buffet.

The lobby area encouraged parents.
Add an image to this gallery

On Communism and Empathy.

Proper Discipline.
Add an image to this gallery 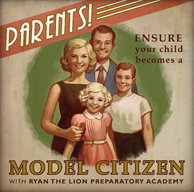 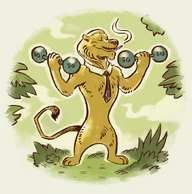 Self-interest is the only thing that is acceptable.

Possession's use in Rapture.

A young mind's thoughts on empathy.
Add an image to this gallery

Retrieved from "https://bioshock.fandom.com/wiki/Ryan_the_Lion_Preparatory_Academy?oldid=317334"
Community content is available under CC-BY-SA unless otherwise noted.