Sally is a character featured in the BioShock Infinite downloadable content Burial at Sea. She is an orphan living in Rapture whom private investigator Booker DeWitt became attached to and later took in after the orphanages were shut down by the city council.

Like many children in Rapture born in lower-class families, Sally was orphaned by her parents and sent to a Little Sister's Orphanage, a business front for Frank Fontaine and Fontaine Futuristics. Because of exposure in a smuggling ring, Fontaine was "killed" resisting arrest by Ryan Security.

Fontaine's businesses were seized by the City Council and shut down, including the orphanages. Sally was left wandering in the streets of Rapture and in turn found local investigator, Booker DeWitt. He fed Sally once and eventually, DeWitt adopted her.

DeWitt, an alcoholic and gambler, spent his time at the race track and tables in Sir Prize. One day when Sally was taken to Sir Prize by DeWitt, after winning at the tables he noticed Sally had vanished. Sullivan claimed that Sally's body was found floating in the docks. The truth was that she had been kidnapped to become a Gatherer.

The artist Sander Cohen, to fund his lavish lifestyle, was involved in trafficking young girls to be turned into Little Sisters, selling them to those who could pay a high price. After Sally had become a Little Sister, she was taken to Fontaine's Department Store, now a prison containing Fontaine's criminal gang members. Elizabeth asks Booker of Cohen's reasoning as to why he sent Sally to the sunken Department Store to which Booker replies that Sander must have thought of it as "high art". Although, as the two first descend towards the Department Store, Cohen mentions that he provided services for those who could pay, implying Atlas had paid for a Little Sister to be sent to the department store.

Elizabeth goes to see Booker on December 31, 1958 and claims Sally is actually alive, and takes Booker to see Sander Cohen, who knows of Sally's whereabouts. Sally, alive, was in Fontaine's Department Store and is found by Booker and Elizabeth. They make it to the Housewares department just in time to see Sally enter a vent to escape a Splicer chasing her. Booker eliminates the Splicer, but Sally retreats deeper into the ventilation system. Elizabeth formulates a plan to drive the girl out: close all vents but one and turn up the heat.

Elizabeth's plan works, but Sally starts to get burnt in the vents, visibly distressing Booker. They find Sally at the mouth of the open exhaust vent, far too terrified to come out. Booker attempts to coax Sally out, but sees she has been turned into a Little Sister. Sally calls for the help of her Big Daddy, a Bouncer, who engages Booker. Once Booker defeats her escort, he returns to the vent to get Sally out, but she still refuses. Booker becomes more and more insistent and pulls at the child, which causes his blocked memories to come flooding back. Reeling from his visions and the taunts of Elizabeth and Rosalind and Robert Lutece, he looks back into the vent and Sally is nowhere to be seen. Booker DeWitt — now realized as a version of Zachary Hale Comstock from another dimension — is killed by the recuperated Bouncer.

Elizabeth abandons Sally after the Big Daddy kills Comstock, but the enraged monster then turns against her and kills her. In the recesses of her mind, Elizabeth dreams of Paris and of rescuing Sally, feeling remorse for hurting and leaving her to die. The guilt becomes too strong and Elizabeth chooses to return to Rapture and save Sally, even if it means losing her quantum powers by returning to a universe where she has died. Eventually, Elizabeth awakens next to Comstock's body as Sally is taken hostage by Atlas and his henchmen. Facing execution by one of his thugs, Elizabeth lies that she is Suchong's lab assistant. She offers in exchange for Sally's freedom to get Atlas and his men out of their prison.

In the end, Elizabeth uses the Lutece Particle to bring the sunken Department back up to Rapture. Atlas captures Elizabeth and threatens her with a transorbital lobotomy, demanding to know where his "Ace in the Hole" is, since Suchong claimed to have it. Elizabeth accepts her fate, and Atlas instead threatens a lobotomy on Sally. Elizabeth has a vision of Booker and Sally showing her Suchong's clinic, and Elizabeth tells Atlas that the "Ace" is there, and that she can get it.

Elizabeth obtains the "Ace in the Hole" from Suchong after she indirectly causes him to be killed by a Bouncer. She brings the information to Atlas, who lets Sally go but beats Elizabeth to death with a wrench. In her dying moments, Elizabeth foresees the future events of Jack arriving in Rapture, rescuing and curing Sally, and bringing her to the surface along with the other Little Sisters. Sally holds Elizabeth's hand and sings to her "La Vie En Rose" as she peacefully passes away.

An adult Sally is contacted by the television series Fact From Myth in the 1980s about a series of artifacts believed to be connected to Rapture — one of them being the painting local Rapture artist, Sander Cohen, had done on New Year's Eve, 1958 in the Garden of the Muses, with Booker DeWitt and Elizabeth dancing as his muse. Upon seeing the photograph of the painting, Sally becomes emotional, throws out the photographs, and quickly locks herself in her home.

Concept art for the appearance of Sally's doll, #12 was chosen. 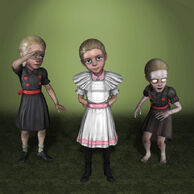 A Splicer chases Sally into a vent.

Sally as she appears in a nightmare.

Visions of Sally in Elizabeth's nightmare.

A vision of Sally.

Sally after comforting Elizabeth during her final moment.