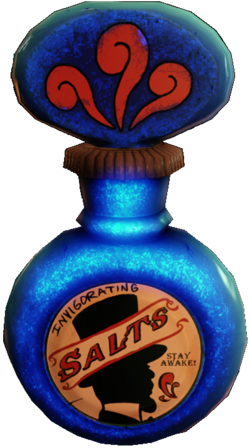 Salts are a chemical substance enclosed in blue bottles which allow the use of Vigors. The player's current Salts level is shown by a segmented blue bar, displaying both the amount of Salts remaining and the number of times the player can cast the currently equipped Vigor before running out.

Booker DeWitt can find Salts in many places, including Tears, the environment, loot containers, corpses, Dollar Bill vending machines, and even from Elizabeth if she comes across a bottle. Certain consumables, such as coffee and soda, will also replenish a small portion of the player's Salts, while drinking alcohol will deplete a small amount. Smoking cigarettes will also increase the player's Salts, though at a cost to Booker's health.

While Elizabeth is in Columbia, Salts replace drinkable EVE, and can be found in Dollar Bill vending machines.

A barrel of Salts from a Tear.

A crate of Salts in Finkton.