"Cohen's an artist, says some. He's a Section Eight, says I. I've seen all kinds of cutthroats, freaks, and hard cases in my life, but Cohen, he's a real lunatic, a dyed-in-the-wool psychopath ..." -Atlas

Sander Cohen is a self proclaimed artistic genius who resides in Fort Frolic. Following the descent of Rapture into chaos, he went mad and became sadistically impassive to the deaths and suffering of others. The splicers within his dominion are subject entirely to his whims, whether in life or death. All around Fort Frolic can be seen examples of his 'art'; plaster models of splicers who are in fact horrifically murdered splicers coated in plaster. (It should be noted that any plaster statues in the shape of Little Sisters seem to be actual statues, as when they are whacked or harmed, they do not bleed or make the appropriate sounds). However, it should also be noted that three dead Little Sisters in an abandoned apartment do not bleed or even react to being struck.

Sander Cohen runs Fort Frolic after having locked the area down to prevent its remaining inhabitants from escaping and is the main antagonist of the level of the same name. As with the Medical Pavilion's Dr. J.S. Steinman, he is insane, driven so partly by plasmids and out of frustration for the lack of appreciation for his work (an audio diary reveals that he regrets his decision to move to Rapture). He was given the key to operate the level by Andrew Ryan. His character may have been partly inspired by Surrealist artist, Salvador Dali.

Before Rapture descended into chaos, Cohen was still an important factor in Fort Frolic, owning a gallery of art, as well as producing several theatrical shows, one of which, named "Patrick and Moira", was obviously an inspiration for Fontaine and his alter ego. Cohen was the most notable enemy of another singer/actress, Anna Culpepper, who called him "Ryan's songbird". He used his contacts with Ryan, who specifically chose Cohen to join him in Rapture, to "Put the bump" on her, as said by Security Chief Sullivan, who had to do the dirty work. Anna Culpepper's body can be found in her bathtub in her apartment in Olympus Heights. With the competition gone, Cohen experienced a rare era of extravagance before his downfall into insanity. It is hinted throughout the game that Cohen is homosexual, and that he was deeply in love with Andrew Ryan before Rapture's collapse, both through audio logs where various people refer to him as "old fruit" and such, and through radio messages where even Cohen himself refer to Ryan as the "man I once loved". This affection wasn't mutual, and it is never spoken out clearly that Cohen is indeed homosexual.

During the time between New Years Eve 1959, and the time that Jack arrives, Cohen apparently had four disciples, although he may have had more. The first was apparently either Silas Cobb, Martin Finnegan, or Hector Rodriguez. Cobb was a member of Cohen's inner circle before '60, probably because he sold Cohen's records in his Store. He practically worshipped the "Musical Genius" that he saw Cohen as. That is, until Cohen deemed him "Unworthy" and shut him in his own record store. When Jack arrives, Cohen sends him to kill and photograph Cobb, to complete his masterpiece. Before he is killed by Jack, he reveals in a diary that he thought Cohen was a genius because, as he said, "You paid the rent, you ancient Hack!"

Hector Rodriguez was most likely a man who spoke out against Cohen and his lot during the days of sanity. However, he was likely given a chance to repent by Cohen as his disciple. His ideal that art was "all Grift" remained the same, and like the rest, was vengefully put in the freezer of Poseidon Plaza. He frequented the Strip Club, Eve's Garden, and when the plasmids drove him mad, he apparently created the delusion that the place was still up and running, although with slightly worse service. Jack finds him there when he is prompted to photograph his corpse for Cohen's masterpiece.

Martin Finnegan was a shady fellow, who apparently had no problem using drastic measures. After being tossed in the freezer for being unworthy, he dominates the others, making himself a plasmid cocktail, and calling himself "the Iceman". He freezes his victims and puts them in dramatic poses. He attempts to do so with Jack as well, but ends up dead and photographed on Cohen's masterpiece.

Finally, the last certain Disciple was a young man named Kyle Fitzpatrick. Cohen chains him up to a Grand Piano in Fleet Hall, the theater in Fort Frolic. Cohen commands him to play his score perfectly, and when Fitzpatrick refuses to play anymore, Cohen detonates the TNT attached to the Piano. As it turns out, the masterpiece was apparently written as a requiem, for Cohen was readily prepared for his failure and had Jack photograph his corpse, as if it were all part of his plan.

He has the player (Jack) hunt down and kill the 4 aforementioned men and take pictures of their bodies to finish his "masterpiece". After the player completes his Quadtych, as the work is known, Cohen reveals himself, amongst a host of spotlights and confetti and congratulates Jack on his work. Cohen then reward Jack by opening one of the glass cases nearby the stage.

Ryan later states in Hephaestus that Cohen remained there, appreciating his Quadtych. This suggests that he remains in Rapture until his death.

Both Xbox 360 and PS3 Specific Where you choose to kill Cohen affects which achievements you can obtain. If you let Cohen live in Fort Frolic, you will be able to gain access to a secret area in his living quarters in Olympus Heights later in the game. Entering the second floor of his apartment will give you an achievement and an otherwise unattainable Power to the People vending machine. To gain access, simply disrupt the two dancing Houdini Splicers in his apartment either by attacking them, knocking over their record player, or playing the piano; Cohen will then come down to kill you. Obtain the second achievement by taking a photo of his corpse. 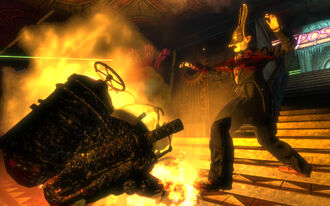 If you want to get back at this psychopathic thespian promptly, you may attack him in Fort Frolic. He is relatively strong and uses a similar attack pattern to a Houdini Splicer except with more health, and a much larger teleportation range. When you kill him, search his body to find some EVE hypos and a key, which will grant you access to the second glass case containing the muse box, for some money and items.

To receive both achievements quickly, simply save in Fort Frolic after Cohen has revealed himself, but before you attack him. You may then initiate a fight, once he is dead, take his photo to unlock the achievement and then reload your save to before you attacked him. Then allow him to live, and leave the level without attacking him.

Note that if you choose to wait to kill him in Olympus Heights, you may return to Fort Frolic after killing him, set the Quadtych on fire, and he will reappear in a rage. This is either a "known issue" or an odd story dynamic; if Cohen is related to Ryan, he could use a Vita-Chamber--he can certainly use the bathysphere, as there is no other known way to Olympus Heights from Fort Frolic, and he beats you there--and it would explain his sudden reappearance. 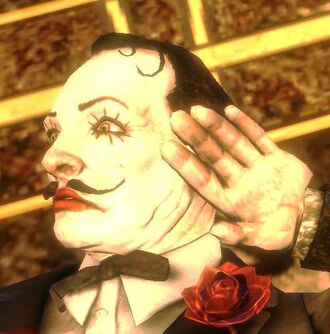 PC Specific Killing Cohen in Fort Frolic is sadly pointless, because there are no special achievements in the PC version and the treasure inside the muse box is pathetic. Although, if you do not attack Cohen in Fort Frolic, you will be able to gain access to a secret area in his living quarters later on in the game in Olympus Heights which in turn will give you access to an otherwise unattainable Power to the People vending machine. To gain entry to the second floor of Cohen's apartment, simply disrupt the two dancing Houdini Splicers in his apartment, Cohen will then come down to kill you.

There is a notable glitch in the PC version; if you kill Cohen in Olympus Heights you may still salvage the key to the Muse box back in Fort Frolic.

The Victims are the same in the PC and Xbox 360 version.

Victim 1: Kyle Fitzpatrick, on the stage of Fleet Hall. Reward: Crossbow. Steel-tip Bolts can be bought from the Ammo Bandito in the Cocktail Lounge (across from Marquis D'Epoque Tobacco), as well as at 3 Vending Machines in Poseidon Plaza. Incendiary Bolts can be bought at 5 machines in Fort Frolic.

Note: You probably don't want to visit Eve's Garden before posting Silas' picture. Once you activate Hector at Eve's, a hard-charging suspenseful beat starts that can last a long time; also, the pointers tell you where Hector is, even if you're after Silas.

Victim 3: Silas Cobb, in Rapture Records. Reward: 5 Electric Buck, $20, 20 Electric Gel. After you post Cobb's picture but before you get your reward, Sander throws approx. 20 splicers at you. They are comparatively easy to kill, and have a bit more loot than usual (First Aid Kits, Frag Grenades, Buckshot, etc.).

You can kill Cohen in Fort Frolic at this point, but if you do, you won't get access to his Power to the People machine in Olympus Heights.

Victim 5: Sander Cohen, in the Mercury Suites of Olympus Heights. Reward: $100, 8 Incendiary Bolts, and 3 Spider Splicer Organs in Cohen's Muse Box (back in Fort Frolic). Bonus: $87 and 36 Antipersonnel Auto Rounds on Cohen, and the Power to the People machine and a fair amount of ammo up in his room.

Retrieved from "https://bioshock.fandom.com/wiki/Sander_Cohen?oldid=10351"
Community content is available under CC-BY-SA unless otherwise noted.