Fort Frolic or Olympus Heights (will only attack if provoked)
115px

“Cohen's an artist, says some. He's a Section Eight, says I. I've seen all kinds of cutthroats, freaks, and hard cases in my life, but Cohen, he's a real lunatic, a dyed-in-the-wool psychopath...”
― Atlas

Sander Cohen is a poet, composer, sculptor and playwright residing in (as well as ruling over) Fort Frolic. Following the descent of Rapture into chaos, he went mad and became sadistically impassive to the deaths and suffering of others. The Splicers within his dominion are subject entirely to his whims, whether in life or death. All around Fort Frolic can be seen examples of his 'art'; plaster models of splicers who are in fact horrifically murdered splicers coated in plaster.

Sander Cohen was an artist who lived in New York. Although little is known of his life pre-Rapture, some of the scant information we have tells us that he eventually became colleagues with an Elgar Vankin and Mimi Tabor. It is implied that he converted them to the Ryanist philosophy since they began speaking of a coming utopia with an almost religious-like fervor. It could also be assumed that Cohen's talent as an artist was looked on as dubious at best, given his frequent run-ins with the "doubters" and Lee Wilson Seward's commentary that he was a "fraud". Given Cohen's role of proselytizing the Ryanist philosophy in this case, it seems possible that he and Ryan may have already been close colleagues before the creation of Rapture.

Cohen runs Fort Frolic after having locked the area down to prevent its remaining inhabitants from escaping, and he is the main antagonist of the level of the same name, despite the fact he personally never attacks you. As with the Medical Pavilion's Dr. J.S. Steinman, he is insane, driven so partly by Plasmids and out of frustration for the lack of appreciation for his work (an Audio Diary reveals that he regrets his decision to move to Rapture). He was given the key to operate the level by Andrew Ryan.

Before Rapture descended into chaos, Cohen was still an important factor in Fort Frolic, owning a gallery of art, as well as producing several albums, the latest of which was the very heavily advertised Why Even Ask? and theatrical shows, one of which, named "Patrick and Moira", was obviously an inspiration for Frank Fontaine and his alter ego. Cohen also wrote the Rapture anthem, "Rise, Rapture, Rise." Cohen was the most notable enemy of another singer/actress, Anna Culpepper, who called him "Ryan's songbird". He used his contacts with Ryan, to "Put the bump" on her, as said by Security Chief Sullivan, who had to do the dirty work. With the competition gone, Cohen experienced a rare era of extravagance before his downfall into insanity.

Before Jack arrived in January of 1960, Cohen apparently had four disciples, although he may have had more. They were Silas Cobb, Martin Finnegan, Hector Rodriguez, and Kyle Fitzpatrick. All of them either betrayed or displeased Cohen at some point.

When Jack arrives in Fort Frolic, Cohen cuts off his radio contact with Ryan and Atlas, stranding him on the level by causing the Bathysphere to submerge. Cohen then toys with Jack, inviting him to Fleet Hall to see a performance. This turns out to be the final performance of Kyle Fitzpatrick, who is plastered to a piano rigged with explosives. After the piano explodes, killing Fitzpatrick, Cohen requires Jack to take his photo and place it in his "Quadtych," a masterpiece that he says people will remember him by when he is gone. Cohen then sends Jack to Poseidon Plaza, promising to let Jack take the Bathysphere to Ryan only after Jack has killed and photographed his remaining three disciples, placing each photo in his Quadtych.

Once the third photo is placed in the Quadtych, Cohen has a paranoid moment, calling Jack a "doubter" and sends some splicers to kill him (with the lights dimmed, a spotlight on Jack with "Waltz of the Flowers" from The Nutcracker by Tchaikovsky[1] playing), but Jack fights them off long enough for Cohen to calm down.

After the player completes the Quadtych, Cohen finally reveals himself, amongst a host of spotlights and confetti, descending the staircase in the Atrium of Fort Frolic to congratulate Jack on his work. Cohen then rewards Jack by opening one of the glass cases near the stage.

If the player chooses not to kill Cohen at Fort Frolic then Jack will encounter him later in his apartment at Mercury Suites. There, Cohen welcomes him into his home saying "Come into the light, little moth, come in. " Jack enters and sees two Houdini Splicers dancing to the music of a precariously balanced phonograph. If the player disrupts the dancers and kills them then Cohen will descend from his room upstairs and attack. However, if the player leaves the dancers alone then it is entirely possible for Cohen to survive the events of BioShock.

Cohen is one of the only enemy characters encountered that does not use the "Would You Kindly" phrase to force Jack into doing anything, possibly because Cohen is unaware of the phrase. As a result, Cohen does not force Jack to kill his former disciples and Jack does it of his own free will as Atlas didn't use the phrase until he regained contact with Jack, where he ordered Jack to head to Hephaestus (this was said AFTER Cohen's disciples are dead and he has unlocked the way to Hephaestus). He was motivated however, as he needed to kill them to be able to leave Fort Frolic.

The Victims are the same in the PC , PlayStation 3, and Xbox 360 version.

The player can kill Cohen in Fort Frolic at this point, but if they do, they won't get access to his Power to the People machine in Olympus Heights.

Both Xbox 360 and PS3 Specific

Killing Cohen in Fort Frolic is sadly pointless, because there are no special achievements in the PC version and the treasure inside the muse box is nothing noteworthy. Although, if the player does not attack Cohen in Fort Frolic, they will be able to gain access to a secret area in his living quarters later on in the game in Olympus Heights which in turn will give them access to an otherwise unattainable Power to the People vending machine. To gain entry to the second floor of Cohen's apartment, simply disrupt the two dancing Houdini Splicers in his apartment, Cohen will then come down to kill the player.

If one waits to kill Sander in his apartment in Olympus Heights, the player may still salvage the key to his Muse Box at Fort Frolic. Simply return to Fort Frolic via bathysphere to claim the treasure.

Sander Cohen duking it out with a Bouncer Big Daddy. 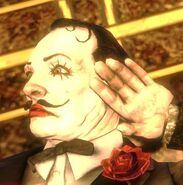 Concept art of Cohen's model.
Add an image to this gallery

Retrieved from "https://bioshock.fandom.com/wiki/Sander_Cohen?oldid=83138"
Community content is available under CC-BY-SA unless otherwise noted.