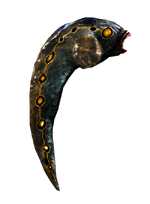 “This little Sea Slug has come along and glued together all the crazy ideas I've had since the war… it doesn't just heal damaged cells, it… resurrects them… I can bend the double helix… black can be reborn white, tall, short, weak, strong…”
― Brigid Tenenbaum[src]

The Sea Slug (or ADAM Slug) is an underwater mollusk known to naturally produce a raw form of the volatile genetic material known as ADAM. It is apparently indigenous to the seabed around Rapture and has since spread throughout the Atlantic Ocean. It is utilized in Rapture to create ADAM, and in turn, Plasmids. The slugs' ability to produce ADAM is thought to be the result of a mutation caused by a large Luminescent Biomass in ocean rifts deep below Rapture, which can be seen beneath Persephone in BioShock 2.[1]

“How do they work?"
"Something about stem cells…”
― Rapture Citizens[src]

Living in an underwater city at the bottom of the Atlantic Ocean, the citizens of Rapture encountered marine life in ways they could never have on the surface. One day, biologist Dr. Brigid Tenenbaum observed a dock worker in Neptune's Bounty who had recently regained the use of his hand years after a crippling injury. The man revealed that a Sea Slug brought in from the ocean had bitten him. The interaction with the strange animal had resulted in the miraculous recovery. Tenenbaum retrieved the slug and began to study its amazing biochemistry.[2] Her research would unlock the key to medical and consumer genetic modification and herald the age of ADAM.

In order to produce greater quantities of the ADAM to meet commercial demand for the citizens of Rapture, the slug must go through a symbiotic embedding process, where it is implanted into a small child, specifically, a young girl, aged 5–10 (possibly). Through this procedure, the young girl becomes what is called a "Little Sister," and the slug creates ADAM with the child as its symbiotic host. ADAM is then regurgitated by the Little Sister, which can be processed to make a number of ADAM products for a variety of other uses. In the game, the player can use ADAM from a Little Sister to purchase Plasmids, Gene Tonics, and other improvements at a Gatherer's Garden machine.

Over the course of BioShock, Jack will obtain Sea Slugs if he chooses to harvest the Little Sisters he encounters. These Sea Slugs, freshly removed from their hosts, are shown to be a brownish-black color, with reddish-orange luminescent spots on their exterior.

As in the first game, the slugs are visible during the process of harvesting a Little Sister in BioShock 2, but are only faintly seen. They can also be seen when the player is walking outside in the Atlantic Ocean around Rapture. These slugs, having never been implanted inside a human body, are a clean, pale color with pinkish luminescent spots. They are found lying on the sea floor, gripping walls, etc. Subject Delta can pick them up to supply himself with 10 ADAM per slug. There are five in total.

Three of them can be found in the beginning underwater section.

Harvesting a Sea Slug in BioShock 2.

A Sea Slug on the ocean floor in BioShock 2.

In BioShock 2's downloadable content, Minerva's Den, there are a total of nineteen Sea Slugs to collect. Some of the Sea Slugs are underwater, while others are contained in glass jars. Each jarred Slug is named for one of the developers of Minerva's Den.[3]

The first four Slugs can be found outside in the ocean starting point.

The remaining Slugs in this level are located inside the building and are mostly contained in jars.

Four of the Slugs in this level are located on the seafloor. The player can obtain them when asked to get the Signal Beacon.

The remaining Slugs in this level are located inside the building and are contained in jars. 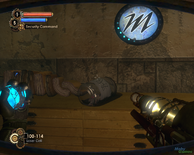 A Sea Slug found in the ocean.

A Sea Slug seen through a window looking out to the ocean. 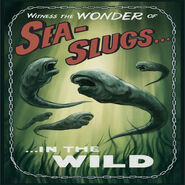 An exhibit on Sea Slugs can be found at the Oddities Wing of the Point Prometheus museum map of BioShock 2 Multiplayer. Unlike their other appearances through the series, they appear there in various sizes.

Sea Slugs are also seen in BioShock Infinite's downloadable content, Burial at Sea - Episode 1. While they had most often been seen near the sea floor in previous games in the BioShock series, here it's shown that, given the opportunity, they could travel to relatively high-elevation places around the city. A trio of slugs can be seen perched on an exterior window ledge at the lookout outside The Watched Clock on High Street. A couple nearby are observed wondering about how they function revealing that the average Rapture citizen had at least some knowledge of the slugs' role in the ADAM production process before the Rapture Civil War.

In Burial at Sea - Episode 2, many tested, stuffed, and dissected Sea Slugs can be seen at the Fink Manufacturing Research Laboratories. It is revealed that Jeremiah Fink sent people to various points in the Atlantic Ocean for expensive underwater expeditions in order to find the ADAM needed to produce Vigors, as heard in the Voxophone No Profit for the Prophets. A chalkboard also shows their anatomy, while another one reveal that hosts are essential in the life cycle of Sea Slugs, reinforcing their parasitic nature.

Models for the early sea slugs, as seen in the Museum of Orphaned Concepts.

A Sea Slug Harvested from a Little Sister by Subject Delta.

Renders of the Sea Slugs seen in Fink Manufacturing. By Chad King.