Securis is a brand of bulkhead doors used throughout Rapture. The main function of these gates was to prevent floods that could occur in the damaged areas of the underwater city. In the event of a critical flood, these gates were automatically closed, providing security to the rest of the city.

In Rapture, a city built on the ocean floor, the leaks were deadly. That is why, by the time the city was finally finished, precautions had been taken and implemented in it, which were supposed to minimize the risk of flooding. These measures included, for example, the greater autonomy of the city's buildings, connected to each other only by a few pedestrian tunnels, which, if necessary, could be blocked with Securis watertight bulkhead doors, thus guaranteeing safety for the rest of Rapture. In addition, these doors acted as an excellent fire extinguishing agent; due to their high tightness, they could prevent the spread of fire and poisonous smoke.

Despite all of the above, the gates between the various levels of Rapture were not always able to provide complete flood protection. The continuous pressure of the water in the bulkhead eventually led to its failure and water began to seep through it, gradually flooding the adjoining room. This was due to the fact that the Securis gates were not originally designed to provide long-lasting isolation from damaged areas of Rapture - they were supposed to contain floods only for a short time, while city emergency services would fix the resulting leak. So naturally, after the collapse of Rapture, gates could no longer provide security in the city. Each of the doors in Rapture is also equipped with a photocell that prevents it from closing.

Securis Bulkheads are what Jack uses, usually in areas that have connections to the ocean surrounding Rapture, such as glass pedestrian pipes and Rapture subway stations. Despite the civil war raging in Rapture for almost a year, most of the bulkhead doors are still in excellent condition.

However, twice at the start of the game, the Securis gates will fail in front of the player. The first time Jack goes through the tunnel in the Welcome to Rapture level, the passage will be destroyed by the tail of the Apollo Air Flight DF-0301 plane. The bulkhead will block the flooded passage, but the pressure of the seawater will be so strong that it literally squeezes the latch mechanism on the door and begins to flood the room, serving as an incentive for Jack to move faster. The second time, the Securis door will drop the player into the Medical Pavilion. After the fight with Dr. Steinman, when Jack heads to the Bathysphere Station, the door will close in front of him due to a leak in the tunnel, prompting the player to search for a solution.

Securis are seen again in BioShock 2, but now they look rusted and damaged by years of exposure to water, often covered in algae and coral, plant life, and poor maintenance. Many Securis bulkheads are blocked or non-functional, and others need to have their door control panel activated by using Electro Bolt. Some security doors need to be hacked open by using the Hack Tool.

Securis Doors reappear in the BioShock Infinite downloadable content Burial at Sea. These bulkheads can be viewed in pristine condition on Market Street in Rapture before the war. However, later in Fontaine's Department Store, which was turned into a prison, many of these doors are already in a deplorable state, they have been smashed by the imprisoned Splicers here and are often completely de-energized, so in some cases they can only be opened with physical force, manually turning the gear of the door shutter with the Air Grabber. In addition, in some places there are double bulkhead doors; after entering one of them, the player waits a bit until the pressure evens out, and only then is the next door opened. These can be considered a cheap analogue of decompression chambers, which were hastily installed to ensure tolerable operation of department stores.

The first Securis door the player encounters in BioShock in 1960. 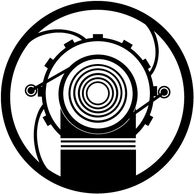 Locking mechanism (used in the Cult of Rapture logo).

Concept art for the Securis airlock for BioShock 2.

Elizabeth manually opening a Securis door with her Air Grabber.