For the security machines of Columbia, see Basic Security Automaton. 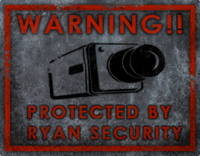 Before the collapse of Rapture's society, internal security was mainly handled by a police force headed by Andrew Ryan's lieutenant, Sullivan. With Sullivan having resigned, and the police force in shambles (with some of its remnants joining the Splicer forces scavenging the city), the automated security forces were left with the duty to guard what remained of the city. Security in Rapture revolves around a three-pronged approach with cameras as constant surveillance, automated static defenses as sentries, and automated mobile units as enforcers which travel to the location of disturbances. Major enemies have shown some degree of control over the security system, as a few Splicers have been able to turn these defenses to their advantage by hacking, and even set them up in the player's path. The player is also able to employ all three systems to their advantage, if they choose. Generally, the security becomes more formidable as the player progresses through Rapture, and operates more effectively. Most of the automated security devices were designed by Gilbert Alexander[1] and are coordinated by computers at Rapture Central Computing.[2]

Throughout the city of Rapture, Bots are called by alarms issued by Security Cameras and vandalism sensors. Security Bots appear to hover and fly using the same method as helicopters, and are armed primarily with Machine Guns. When an unauthorized person is discovered, the Security Camera's siren will sound and an unlimited supply of Security Bots will pour out for a limited interval. There are three ways of taking down Security Bots: the player can destroy them, shut off the security system by paying the money demanded to access a Bot Shutdown Panel, or manually hack into their systems. This security system can also be utilized by the player, either by hacking it and it following them about, or using the Security Bullseye Plasmid to call Security Bots against an enemy. In BioShock 2, the Security Command 2 Plasmid allows players to summon Security Bots. The maximum number of Security Bots assisting the player at any one point in time is two.

Occasionally, the player will come across Splicers using hacked Security Bots of their own. If the controlling Splicer is killed, the bot will shut down, allowing the player to claim it by hacking. Splicer/Bot pairings are identified by pulsating red signal waves emanating from the bot and the Splicer's head.

The Security Camera is a mounted bot with a red searchlight that becomes white once it detects a hostile entity and attempts to identify it. If the camera detects the player, they have about two to four seconds, depending on their equipped Tonics, before the alarm gets triggered, summoning a wave of Security Bots. The camera is susceptible to all weapons, especially electricity, which causes the camera to short out temporarily, allowing safe passage while it is temporarily disabled. When the player is within close proximity, they may choose to hack the camera, on success causing its light to become green and to be friendly and to ignore the player while detecting their enemies. If destroyed, cameras may provide film for the Research Camera.

Big Daddies and Little Sisters are immune to camera detection. However, using the Security Bullseye Plasmid power on a Big Daddy will cause cameras to initiate an alarm against it.

Turrets are fixed security gun positions, which attack the player once identified after an interval of a few seconds. Turrets attack with either a machine gun, an RPG launcher, or a flamethrower. Turrets can be hacked, although they can too be temporarily disabled via Electro Bolt or Winter Blast, or distracted from targeting the player with Target Dummy or Security Bullseye.

The three original security devices return in BioShock 2, as well as a new type of Turret.

Miniature Turrets are a new Turret type featured in BioShock 2. These are a smaller, portable version of Machine Gun Turrets. However, they can also be picked up and/or thrown around using physics-related Plasmids, and can even be used as projectiles. Several Miniature Turrets can be found lying inactive around the city of Rapture. They are most often deployed by the Rumbler, a new Big Daddy type. They can also be hacked to assist the player as with any other machine.

Retrieved from "https://bioshock.fandom.com/wiki/Security_Devices?oldid=319039"
Community content is available under CC-BY-SA unless otherwise noted.