Transcript: Until ADAM, the human animal was a slave to the gene... the inner Tyrant. Lust... greed... rage -- self-obsession was etched into our DNA. We were not pulling the "Great Chain of Progress," as Ryan believed -- but shackled to it. But now, in theory, we can redraft the human blueprint. Serving the common interest can become as natural as breathing. The tyrant will simply go extinct.

Location: In the office on the 2nd floor of Pump Station Access below a poster which shows a double helix mixed with butterflies. A door needs to be hacked open. 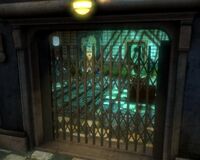 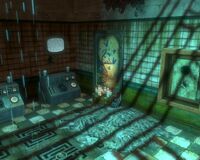 Retrieved from "https://bioshock.fandom.com/wiki/Shackled_to_the_Great_Chain?oldid=221776"
Community content is available under CC-BY-SA unless otherwise noted.