“Harness the power of electricity and keep your enemies on their toes with SHOCK JOCKEY!”
― Fink Manufacturing advertisement

Shock Jockey is one of the Vigors featured in BioShock Infinite, created and sold by Fink Manufacturing. It grants Booker DeWitt the power to manipulate electricity in the form of charged crystals. Casting the Vigor will shock a single target, temporarily stunning them and doubling their damage intake, while charging the Vigor will instead throw a cluster of purple crystals across the target area for double the Salts cost, shocking anyone who comes in their vicinity. Enemies in contact with water take critical damage from the electricity. Shock Jockey can also be used to activate certain machines and unlock previously inaccessible areas. Enemies killed while electrified will turn to ash, leaving behind a lootable lockbox. Shock Jockey is less potent on Motorized Patriots and Handymen, and completely ineffective against the Siren.

Shock Jockey is the fifth Vigor the player obtains, and is the main objective of the Hall of Heroes level, where Booker and Elizabeth set out to retrieve a sample from Cornelius Slate in order to power the gondola to The First Lady in Soldier's Field.

The original appearance of Shock Jockey. 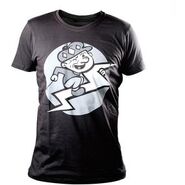 The Shock Jockey logo on a t-shirt from Forbidden Planet.

An in-game advertisement for Shock Jockey.

Shock Jockey being demonstrated at the Fairgrounds.

Shock Jockey generator in Factory.
Add an image to this gallery

Shock Jockey makes a return as a drinkable Plasmid in the BioShock Infinite downloadable content Burial at Sea - Episode 1. Since Shock Jockey functions the same as the Electro Bolt Plasmid, it can also be cast on short-circuited switches to unlock doors just like in BioShock and BioShock 2. This version uses more EVE than its Columbian counterpart uses Salts. Also, unlike the Columbian version of Shock Jockey, enemies killed with the Rapture variant do not turn to ash.

Retrieved from "https://bioshock.fandom.com/wiki/Shock_Jockey?oldid=295245"
Community content is available under CC-BY-SA unless otherwise noted.