BioShock Wiki
Register
Don't have an account?
Sign In
Advertisement
in: Article stubs, Quotes without a source, BioShock Infinite Weapons,
and 2 more

For the Shotgun in BioShock and BioShock 2, see Shotgun (Rapture).
“Nothing handles a cluster of enemies faster than a spray of buckshot from the CHINA BROOM.”
― Fink Manufacturing advertisement

The China Broom, known in-game as both the Shotgun and the Heater, is a spread-fire weapon featured in the arsenal of weapons in BioShock Infinite. Both variants of this lever-action shotgun are available to and usable by Booker DeWitt, as a primarily close-range weapon.

The Shotgun is a reasonably common weapon, used occasionally by Founders and Vox Populi members, as well as being commonly found on the ground, or summonable through Tears. It can be first acquired by the player reasonably early in the game, carried by several Founder ambushers in Battleship Bay. The Shotgun is incredibly effective in close quarters, capable of killing most standard enemies in one shot at point-blank range, and even certain Heavy Hitters in only a few shots, namely Firemen and Zealots. It has very clear sights and decent handling, capable of quickly dispatching enemies that get too close, supplementing the Sky-Hook as an effective close-quarters deterrent. Furthermore, the Shotgun is uniquely capable of firing during a reload if there is at least one shell loaded, limiting the danger that usually comes with long reload times.

However, the Shotgun is not necessarily effective as a primary weapon, mainly because of its very limited range, losing most effectiveness at mid-range and causing no damage beyond that. Although it is possible to kill standard enemies in a couple of shots at medium range, it would be very inefficient use of somewhat limited ammunition, and the player would be advised to actually advance towards the enemy before firing, which can be dangerous in large firefights. Indeed, the Shotgun's small capacity of four shells means that the player will be reloading often if they depend on the Shotgun too heavily. Thus, it is advised to pair the Shotgun with a decent mid-range weapon, such as the Machine Gun or Carbine. However, the Shotgun's lack of mid-range utility can be circumvented by judicious use of the Charge Vigor, which will allow the player to instantly bring themselves into close range, blast a few opponents away, and ideally charge at a distant enemy to escape.

Although the Shotgun is capable of instantly killing standard enemies, its very high damage means that it can be very useful against tougher enemies such as Beasts and Handymen, capable of quickly reducing their health in a few headshots, or heartshots in the case of the Handyman. However, it can be very dangerous to engage enemies such as these in close-quarters, so it is advised to stun tougher foes first with Shock Jockey or possibly Bucking Bronco, and then quickly retreat to reload after attacking, another good way of getting close to the enemy is using the Return to Sender Vigor to collect bullets from enemies and to get as close to the enemy and unleashing a devastating shot. Ammunition for the Shotgun is very common, and can be frequently salvaged or bought cheaply from Dollar Bill vendors, but this ammunition can be depleted alarmingly quickly in longer firefights on higher difficulties.

GameStop customers who preordered BioShock Infinite and those who bought the DLC Columbia's Finest will also get Comstock's China Broom Shotgun. This upgrade for the China Broom Shotgun comes with a unique skin and an exclusive damage enhancement.

2 (with Bullet Boon)
3 (with Ammo Advantage)

The Vox Heater is a modified China Broom, used exclusively by the Vox Populi. It differs in appearance from the default Shotgun, with a generally simpler texture, as well as the distinctive red tape around the barrel that marks it as a Vox weapon. The muzzle is opened out like that of a blunderbuss, and briefly glows bright orange after firing each shot. A uniquely named version of the gun called the "Replica Heater" can be first acquired in Toy Soldiers on the Soldier's Field boardwalk, although taking it before the eventual firefight breaks out will cause all nearby Police to turn hostile. The standard Heater is only encountered much later in the game during the Vox Revolt, carried by certain Vox soldiers in Emporia.

The Heater is functionally similar to the Shotgun, providing very high damage at close range, serving as a brutal backup weapon to enemies that get too close. The Heater's main feature over the Shotgun is its incendiary effect, setting targets alight with each shot and causing a lot of afterdamage. This means the player can quickly subdue most enemies as they flail and take fire damage, giving time to change weapon or reload, or merely watch the target burn to death. (This has no effect on Firemen, though, as they are completely immune.)

However, the Heater's main drawback is its single-shot capacity (though this can be slightly remedied with the use of at least one Gear that gives the gun an extra round), forcing the player to time their shots perfectly as each shot counts, leaving the player momentarily open to attack if they miss, which can be potentially fatal in close quarters. The Heater also has a considerably slow reload speed, as there is a brief delay before loading a new shell to allow the barrel to cool down. Ammo is also very scarce and limited, as Booker can only carry nine shots in total, which is worsened by the scarcity of Heater ammunition in the game. This means that the Heater is usually used as a close-range backup weapon only, accompanying a more versatile weapon such as the Machine Gun or Repeater. 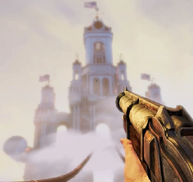 Concept art for a Shotgun.

Concept for a Vox Heater. 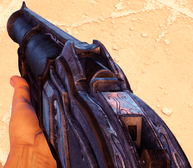 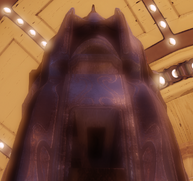 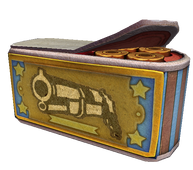 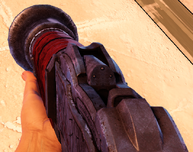 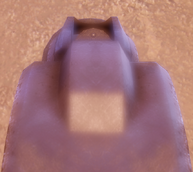 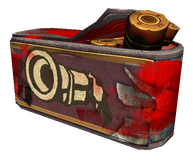 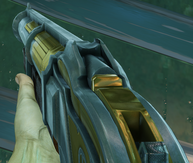 Carrying the Shotgun in Burial at Sea.

Shotgun in Burial at Sea.