For the character in BioShock 2, see Silas Bantam.

“I used to think you were a musical genius. You know why? Because you paid my rent, you ancient hack!”
― Silas Cobb[src]

Silas Cobb is a citizen of Rapture and one of Sander Cohen's former disciples. Jack is sent to kill him to complete Cohen's Quadtych.

During Rapture's heyday, Cobb was a disciple of Sander Cohen's, and showed a lot of admiration for him, describing him as a musical genius. However, this admiration was for the sole reason that Cohen paid Silas' rent.[1]

This all changed during the civil war, when Cobb found himself trapped in Fort Frolic. Not taking too kindly to being imprisoned, he quickly turned against his former employer. Taking up refuge in the Rapture Records in Poseidon Plaza, he joined forces with a number of Splicers who also found themselves trapped, and set fire to all of Cohen's music in the store.

Sometime before Jack's arrival, Cobb used a canister of Napalm on some advertisements for Cohen's music in the Southern Mall, and left Cohen a message challenging him to a fight in the record store,[2] while also claiming that his "collection" was far superior to his.

Silas Cobb can be found in the heavily charred record store, composing his own collection and still waiting for Cohen to respond to his challenge. Once Jack has entered the lower level of the store and set off the bomb that had been waiting for him, Cobb will accuse Jack of being Cohen's messenger boy and send his "Kittens" to attack. Once they are dealt with, Jack will have to hunt Cobb through Poseidon Plaza.

Finnegan may be the toughest of the three disciples to kill, but Cobb is definitely the most dangerous. Approach this fight with caution and a good supply of Heat-Seeking RPGs for the Grenade Launcher.

Silas Cobb is found in Rapture Records. Upon entering, Cobb yells at Jack. Just ignore him and keep on going in. Once the ticking sound starts, take cover in the area under the entry platform because a bomb-filled dummy will go off. Cobb will taunt Jack and unleash his "kittens" - a group of specialized Spider Splicers that are on fire. If the player has Natural Camouflage equipped, they can stand still and wait for the "kittens" to burn to death. The "kittens" drop out of vents in the roof, and if the player is standing in the center of the floor after the bomb goes off, they can get hurt.

Once the "kittens" are all gone, head past the furnace to the far-left corner of the store, where there is a crawlspace door set at the base of the wall. Open it and crawl through the ventway, arriving back on the upper level of the store. Head for the door, and Silas will appear, complaining over the loss of his kittens and tossing Molotov cocktails at the player.

Silas will use smoke bombs to dodge away from the line of fire. Use the Grenade Launcher and blast him with RPGs. Alternatively, one can use Telekinesis to throw his Molotovs back at him. Either way, it won't be long before he goes down.

Alternatively, if the player is confident in their speed and aim, they may make the fight last no more than five seconds by shooting Cobb in the head with a single steel-tip bolt from the Crossbow. This works in all game difficulty settings. A great opportunity to do this is just as the player exits the store, when Silas is mourning his "kittens;" he will stand completely still for a few seconds, granting a clear, if extremely brief, shot.

Once Silas is dead, snap his photograph and head back to the Quadtych.

The following are phrases that Silas Cobb says in BioShock. The name of the source audio file is listed when known. 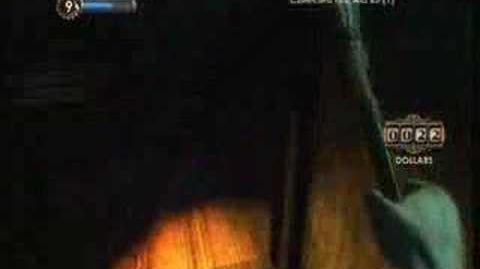 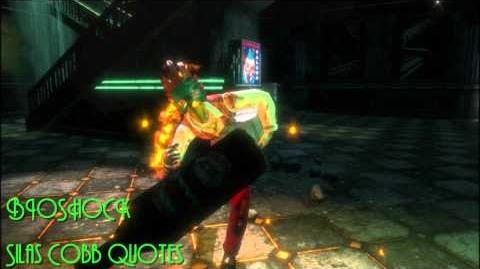