For the currency in Rapture, see Dollar.

Silver Eagles (previously known as Dollars) are the primary currency of Columbia. Silver Eagles are used to purchase a variety of items from vending machines. Elizabeth will also randomly find Silver Eagles and throw them over to Booker DeWitt if he accepts them.

Though Silver Eagles are mostly found in coin form, they can also be collected by picking up wallets, purses, and cash bags as well as silver and gold bars. Locked safes contain several hundred of these coins inside. Though most commodities can be bought with just a few Silver Eagles, permanent upgrades to weapons and Vigors through the Minuteman's Armory and Veni! Vidi! Vigor! vending machines respectively are far more expensive.

In BioShock Infinite, though Booker DeWitt can be revived after taking fatal damage, death has a price, and will cost the player a certain amount of Silver Eagles upon every revival. On Easy Mode, death costs five Silver Eagles, on Normal Mode, the price rises to twenty-five, on Hard Mode, the cost rises again to fifty, and on 1999 Mode, every death costs the player a whopping one-hundred Silver Eagles. Moreover, if the player doesn't have enough money to respawn in the latter difficulty, death will result in a permanent game over.

Concept art for the Silver Eagle coin, by Robb Waters. 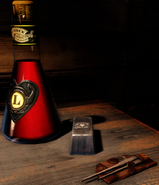 A silver bar, alongside a lockpick and an Infusion.

A purse of Silver Eagles.

A bag full of Silver Eagles.

A real life replica of the Silver Eagle.