Slate's Soldiers are a group of war veterans in Columbia led by Captain Cornelius Slate, who are waging war against Comstock and the Founders. They appear in BioShock Infinite, fortified within the Hall of Heroes.

Slate's soldiers served in the Boxer Rebellion, in which thirty were killed under Slate's command. The war was used by Comstock to glorify his own image, instead of Slate and his troops' achievement and sacrifice. The deaths of these men were largely ignored. Angered by this, Slate confronted Comstock demanding recognition for the men he lost, and as a result was branded a liar and stripped of his rank. In response, Slate gathered a small army of veteran soldiers with loyalty to him to fight against Comstock for his injustices. Announcing a truce with the Vox Populi, as opposed to an outright alliance, Slate's soldiers attacked the Hall of Heroes and captured it to be their base of operations. They soon began to lose their battle against the Founders. Having lost all hope of victory, Slate shifted from fighting over ideals to seeking a "soldier's death", which he felt he could not achieve fighting Founder soldiers.

When Booker DeWitt and Elizabeth arrive at the Hall of Heroes, Slate's soldiers already appear suicidal and desperate to fight Booker, asking if he can provide a "soldier's death", and acknowledging the hopelessness of their situation. Most of Slate's soldiers are killed as Booker advances through the Hall of Heroes, eventually ending their rebellion with Slate's death.

The men are dressed in ornamental uniforms of blue color and gold trim, dressed to be the same uniforms worn by Columbia's soldiers in the Boxer Rebellion. They carry the flag colors of Columbia on their shoulders. The uniform is almost universal amongst Slate's soldiers, with Zealots and Beasts loyal to Slate wearing the same uniform, although Firemen loyal to Slate wear their standard armor. Slate's soldiers wield most standard Founder weapons, mainly Machine Guns and Shotguns. 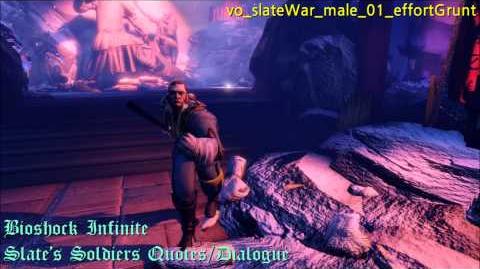 Four different outfits for Slate's Soldiers (Right) (Note all of them are unused).

One of Slate's Soldier's under the effect of Possession.

Booker gunning down one of Slate's Soldier's with a Crank Gun.