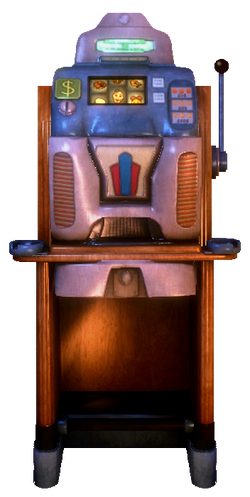 A Slot Machine is a simple form of gambling found throughout Rapture's entertainment venues such as Fort Frolic, Sir Prize: Game of Chance, and the Pharaoh's Fortune Casino. They can also be found at the Mermaid Lounge and High Street.

It will cost Jack ten Dollars to play a round on a slot machine. The first time Jack plays a machine, the machine will yield a payout $25. After the first time, all slot machines' odds of winning will greatly decrease. For Xbox 360 and PlayStation 3 users, getting a $250 payout also means acquiring the "Lucky Winner" achievement/trophy.

Slot Machines return in BioShock 2, although there is no achievement or trophy award for winning the highest amount. They appear in the Mermaid Lounge at Siren Alley, in a room with hidden protection Turrets, which will automatically side with the player when activated.

Slot machines serve as stationery decorative objects in the multiplayer, primarily in the Fort Frolic map. The machines are identical to the single player design, but they do appear in both a blue and yellow color. Three new tiles has also been designed: a yellow bell, a blue fish and orange fruit.

Booker DeWitt can play the Slot Machine in the pre-fallen Rapture. They can be most of the time found alongside a Need to Know Theater on High Street. When he plays the machine the first time, Elizabeth will comment, "Best quit while you're ahead". When the machine stops spinning, it will stop on 7-7-☆. The number 77 is the number on the winning ball that Booker chooses at the Raffle Square in Columbia.

Winning Combinations in BioShock and BioShock 2[]

Unused Tiles from BioShock and BioShock 2[] 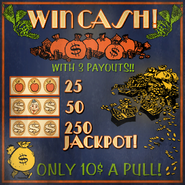 A poster advertising the slot machines.

A group of Slot Machines, found in the Sir Prize Casino.

The Slot Machines found in Burial at Sea - Episode 1.