The Slow-Pro, dubbed "SlowProFum" or "Slow Pro FUM" by the development team, was a Big Daddy type cut from BioShock.

Standing for "slow-moving, projectile-shooting, f'ed-up-melee", this Big Daddy was intended as a slow, ranged type that would center itself and kneel to fire a heavy projectile at enemies via a large arm-mounted cannon. Despite being designed for range, the developers noted its melee attacks were intended to be just as powerful, as shown by the large hook carried around by the Slow-Pro.[1] In an interview with GameTrailers's "Bonus Round", BioShock designers Bill Gardner and Hogarth de la Plante stated it as an aspect cut from the game late in development, and one they would have most liked to have kept out of all the cut content for the title.[2]

BioShock 2 introduced an updated version of the Slow-Pro, the Rumbler, and was given a slight backstory to explain its origins despite not appearing in the first game.[3]

An early iteration of the Slow-Pro, as well as for the overall Big Daddy design, by Shawn Robertson. 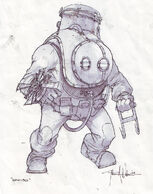 Early concept art for the Slow-Pro by Nate Wells.

An original concept for SlowProFum, by Robb Waters.. 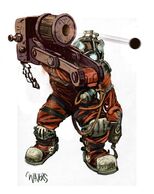 Concept art for the Slow-Pro firing its cannon. 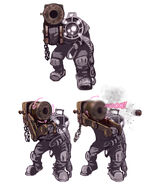 Slow Pro in a concept room. 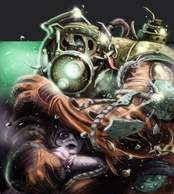 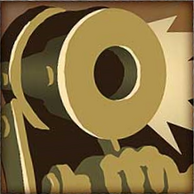 Research Icon for Slow Pro.
Add an image to this gallery

Retrieved from "https://bioshock.fandom.com/wiki/Slow-Pro?oldid=319259"
Community content is available under CC-BY-SA unless otherwise noted.