“…The only people who face capital punishment in Rapture are smugglers, and that's because they put everything we've worked for at risk. Imagine if the Soviets found out about our wonderful city, or even the U.S. government! Our secrecy is our shield.”
― Public Address Announcements[src]

Smuggler's Hideout, or Smugglers' Hideout,[1] is the fourth level in BioShock. It is also the last area of both the 2D and 3D mobile phone versions of BioShock. Since the mobile phone versions end on this level and the console versions do not, they differ significantly from the canon. Jack's objective here is to reach the submarine holding Atlas' family and prep it to escape the city.

After Frank Fontaine recruited his crew, this became the place where the smugglers went about and did their business. According to Peach Wilkins, they had to take Fontaine's mini sub (although there's only a bathysphere ready) topside twice a week, pick up some choice goods not available in a remote place like Rapture: beef, real tobacco, and some little extras (bibles, movies etc.). The smugglers also stole large quantities of alcohol from the Rapture Port Authority.[citation needed] Fontaine also likely used his fishing fleet of submarines to transfer contraband from the surface, allowing much greater scale and scope to the operation, matching the size of the facilities involved.

Jack has been instructed to rendezvous with Atlas at the Smuggler's Hideout in order to escape Rapture with his family. With both entrances sealed, it appears that no one has been using the Hideout since Fontaine's death. However, Jack comes to find that it's not as abandoned as it first appeared.

The first area Jack visits in the Smuggler's Hideout. It was most likely used as a place for storing smuggled goods. The evident flooding must have started just before Fontaine's alleged death, as not all of the crates have been moved above the water level. Things of interest include a smuggled Vita-Chamber, a Gene Bank, and a pneumo tube, which the smugglers probably used to send messages as well as illegal goods.

A cave that was solely used as a means to store the contraband; a lone Machine Gun Turret holds watch for any potential intruders, set in the midst of smuggler's crates holding items like crucifixes and Tan Suan CoLa. Banners can be seen with the smuggler's insignia: a reddish-black hand. The room is dominated by a big machine similar in design to the Ferris wheel motor from the Rapture Grand Carnival.

A path that overlooks the Submarine Bay. It serves as a storage place and a way to the control room.

A room with a switch for opening the doorway to Arcadia. This allowed the smugglers to transport their contraband to other places in Rapture. Its only other use is to store products.

A tunnel leading directly to Fontaine's mini sub and bathysphere. As the name implies, this tunnel was used for submersible and hideout maintenance. There are a large amount of pipes and hydraulic machines, possibly for pumping out water or circulating fresh air. A smuggled Health Station can be seen just outside the Control Room.

The central hub of the hideout. Fontaine's minisub and bathysphere lay ready here. There's also a control board, whose function is most likely operating the crane above the mini sub. In an audacious affront to Andrew Ryan, a hidden passageway links directly to Arcadia, one of Ryan's business interests. 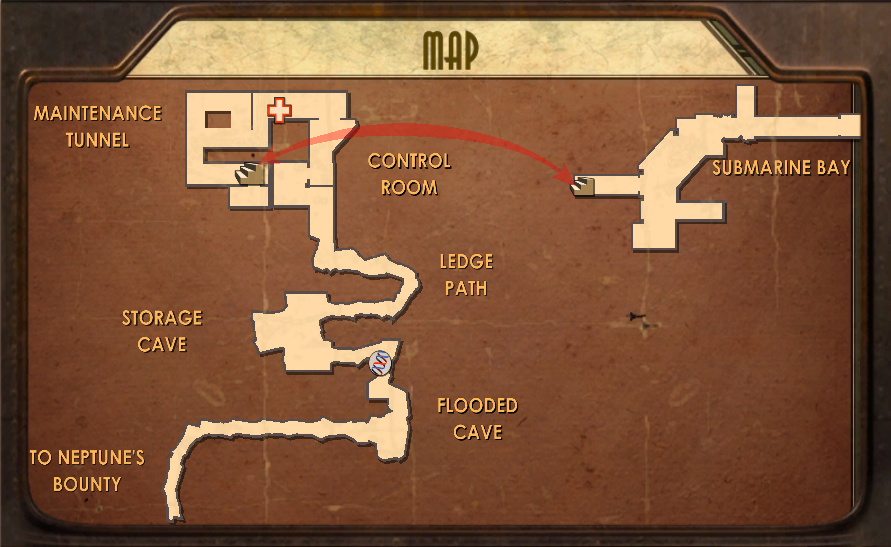 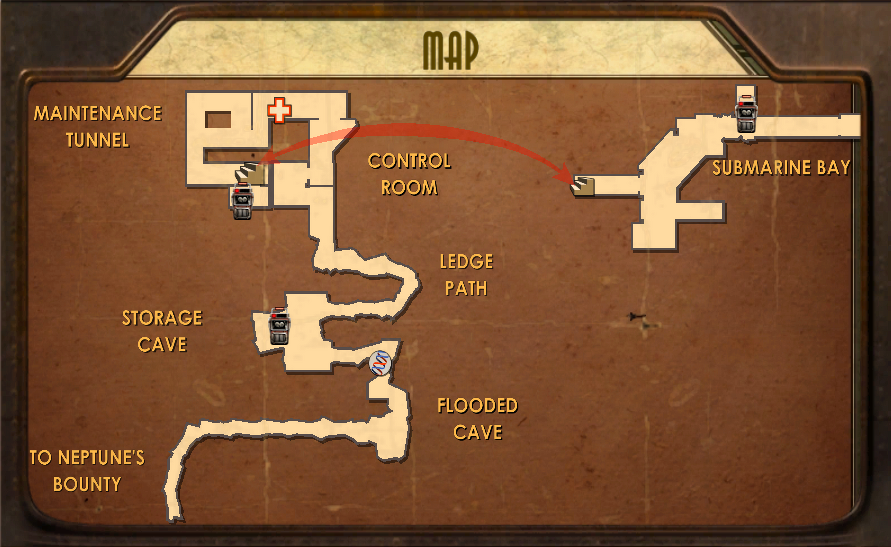 Early Concept Art of the SubBay by Thomas Pringle.

Early concept art for the Submarine Bay in the Smuggler's Hideout.

Enemies lurk in the shadows.