The Bird's Eye, known in-game as the Sniper Rifle, is a long-ranged weapon used by Booker DeWitt in the BioShock Infinite beta gameplay video. It has a large mounted scope running along atop the barrel. It is the weapon used to shove Charles, Henry Saltonstall's minion, off a ledge in the beta gameplay demo. It first featured briefly in a new trailer released in mid-December 2011, with an updated model. In the final game, the Bird's Eye is first seen in Soldier's Field, when taking on one of Slate's Soldiers outside of the Hall of Heroes.

When the player needs to take out an enemy from a very long distance, the Bird's Eye Sniper Rifle is the perfect weapon. Activating the weapon's iron sights allows using a scope to target opponents from quite a distance.

When using the Sniper Rifle, the player might be tempted to aim for headshots, but should try to aim at center mass whenever possible—a single body shot is enough to take out any soldier on Normal difficulty, even late in the game. This is no longer true on Hard difficulty, though. Unless fully upgraded, the Sniper Rifle loses the ability to kill with one body shot hit, so players should aim for head shots to conserve ammo and make quick work of enemies. Equipping Head Master will increase the amount of critical damage dealt, so switch to this Gear if and when you come across it.

While the Sniper Rifle is great against enemies at long distance, it is much harder to use when attackers are close. Aiming while looking down the scope is slow, and it is very difficult to use the Bird's Eye when firing from the hip. Also, due to its small magazine capacity of four rounds, and a long reload time, the player can only take down a few enemies before they close distance, and the Sniper Rifle loses its effectiveness.

In most situations, it is generally best to not retain a Sniper Rifle for too long, especially when it is only available in some areas or with certain Sniper Rifles, and ammo is not as abundant, especially when avoiding using a Dollar Bill vending machine for 1999 Mode. If the player chooses to always carry one around, they should keep a secondary weapon stocked with ammo to use when enemies get close, especially while the player is caught reloading.

An alternate view of the Vox Sniper.

The Bird's Eye, as seen in the BioShock Infinite Demo.

DeWitt wields the sniper rifle in the TV commercial. 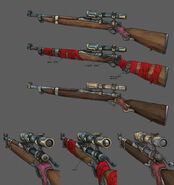