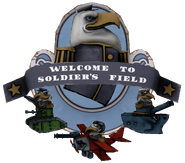 “When the foreign hordes come marching into town…
Will you be prepared to stand those buggers down?
They’ll do their level best to take, all that’s rightly yours.
And it’s your solemn duty to keep them from our shores!
The readiness is all. (When the greenhorn muscles in!)
Oh, the readiness is all. (To bring down an alien!)”
― Soldier's Field Jingle[src] 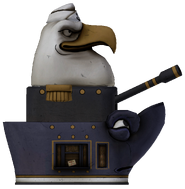 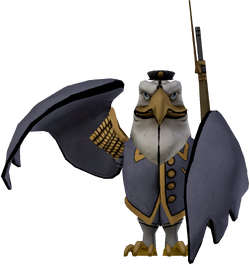 A large Earnest Eagle animatronic display fronts the room, with mechanical Dimwit & Duke soldiers marching to a patriotic, racist song called "The Readiness is All".

On the right is a Minuteman's Armory undergoing a bit of repair with a Lockpicking Kit lying on top of a crate. Around the corner is small display featuring a miniaturized version of the city, bobbing up and down to demonstrate the quantum field that keeps Columbia afloat. A Kinetoscope sits next to the model praising Rosalind Lutece's discovery.

Elizabeth will make a comment on how Soldier's Field was built to indoctrinate children to the idea of national service.

The door to the ticket office on the left is locked, but it can be opened using one lockpick. Inside the outer room is an Infusion.

The main office contains another lockpick, a locked Safe (which requires five lockpicks to open), and several Carbines at the ready. A Voxophone is shelved in the other open Safe.

The door to Soldier's Field is powered by Shock Jockey, but it is apparently unstable and unreliable as evidenced by the shorting out upon approach. The blaring music and mechanical devices fall silent and motionless. With some effort Booker can lift open the gate to find a poster ironically advertising the Vigor's independence from conventional power companies.

Concept art for the center.

Soldier's Field: Built in 1903 by the Hand of Our Prophet.

A diorama of Soldier's Field.
Add an image to this gallery

Early versions of in-game advertisements in the diorama. 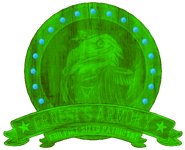 Unused texture mask.
Add an image to this gallery

Retrieved from "https://bioshock.fandom.com/wiki/Soldier%27s_Field_Welcome_Center?oldid=321890"
Community content is available under CC-BY-SA unless otherwise noted.