“Join the Flying Squad!
Defend Columbia!”
― A Columbia Kinetoscope Company Production: Who are the the Vox Populi?[src]

Wielding heavier armor and more powerful weapons than their lesser counterparts, Soldiers form the military force of both the Founders and the Vox Populi. They are easily distinguishable from other enemies by their padding and ammo belts.

There are three kinds of soldiers Booker DeWitt encounters. Found exclusively in and around the Hall of Heroes are Cornelius Slate's Soldiers, who willingly throw themselves at Booker in the hope of an honorable death. They are easily recognizable due to their brightly-colored and ornamented military uniforms.

The Vox Populi counts several military-like enemies among their ranks. Though not professionally trained like their Founder counterparts, the Vox weapons they wield deal heavy damage while their armor offers them extra protection. They typically wear red hoods and masks with stylized horns.

Soldiers also form the military arm of the Founders in Columbia, also known as the Flying Squad. They greatly resemble the American Soldiers of World War I, as they are outfitted with blue uniforms, metal helmets, and backpacks. Among their recruitment process, Dimwit & Duke propaganda was used to encourage kids to join their ranks. Male soldiers wear blue uniforms and metal helmets, while certain female soldiers wear stylized white Statue of Liberty masks.

In BioShock Infinite, the player encounters various types of militants, split between the Founders and the Vox Populi.

Soldiers are seen fighting for the Founders, the Vox, Slate, in the Good Time Club as part of Jeremiah Fink's personal security force, and disguised as civilians in the Arcade of Battleship Bay.

These types of soldiers are only seen fighting for the Founders, using Founder-specific weapons.

These types of soldiers are only seen fighting for the Vox Populi, using Vox-specific weapons.

Burial at Sea - Episode 2, with the re-visit to Columbia, shows the return of Vox Soldiers. Other than the new weapons and Plasmids/Vigors that can be used against them, some changes and additions have been made:

Concept art for the female soldier with the Liberty mask, by Jason Bennett. 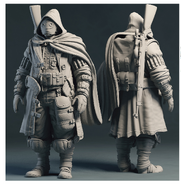 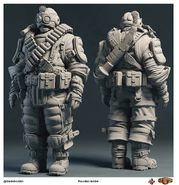 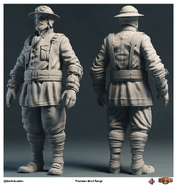 Female pistoleer with a Liberty mask.

The Founder shotgunner in Clash in the Clouds.

The Founder carbiner with a mask.

The Founder carbiner in Clash in the Clouds.

The Founder sniper wearing a hood and mask.

The Founder sniper using a Sky-Line.

The Founder sniper wearing a helmet.

The Founder sniper wearing a hood and goggles.

A Founder soldier undercover as a Columbia Citizen.

Militants of the Vox Populi. 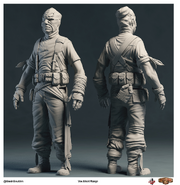 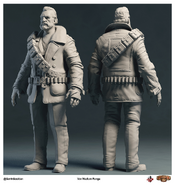 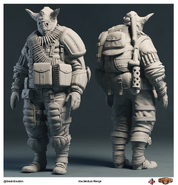 Repeater-user wearing a hat and hood.