Transcript: Sofia believes the perfect human altruist is "just a formula, waiting on us to solve for X." Intelligence and consciousness are not the same, she argued. Awareness of self naturally becomes obsession with it. So if we could suppress my sense of self, but imbue me with cognitive capacity to serve the common welfare... we could thereby generate the first Utopian. And then, Sofia said... at long last... Utopia would follow.

Location: Just under the circuit breaker to the left of Gil Alexander's holding tank. 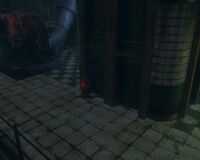 Retrieved from "https://bioshock.fandom.com/wiki/Solving_for_X?oldid=205152"
Community content is available under CC-BY-SA unless otherwise noted.