Changing between Red, Yellow, and Green, depending on mood

“Songbird, Songbird, see him fly,
drop the children from the sky.
When the young ones misbehave,
escorts children to their grave.
Never back-talk, never lie,
or he'll drop you from the sky!

Songbird is a creature or construct of undetermined origins that is feared by the citizens of Columbia, and is Elizabeth's guardian and keeper.[2]

The Songbird was created by Fink Manufacturing and like most of Jeremiah Fink's technology, it was based on designs discovered through a Tear. In actuality, Fink managed to gain the design's blueprints from the Big Daddy. Collaborating with Dr. Yi Suchong of Rapture via Tears, experiments were made to create the beast. Much like the Big Daddy, the Songbird is a combination between a machine and a human.[3] At first, multiple experiments were done with animals, such as gorillas and dogs, to create a successful psychological pairbond with Elizabeth. In the end, a crude prototype was assembled, connected to a breather. Attempts to psychologically indoctrinate the prototype were not successful, so Fink left it abandoned in his old laboratory. In the end, the bond between Songbird and Elizabeth was established by a freak accident -- Songbird escaped the laboratory and accidentally crashed into Elizabeth's tower, forcing Elizabeth to repair its breather. This created a successful pairbond between the creature and Elizabeth, and it would protect her fiercely — On the other hand, Suchong erroneously believed that DNA, in particular, a hair sample, was the cause of the pairbond, and attempted multiple times to figure out how to replicate the Songbird's pairbond with his own Big Daddies.

Songbird's mechanical features are similar to that of the Big Daddy, with color-changing eyes to indicate its mood. Green eyes indicate friendliness towards a person or object of focus, namely Elizabeth; orange indicates awareness but indifference to Songbird's surroundings; and red represents heavy hostility, chiefly towards Booker. Songbird's only weapons are the metal talons mounted on its feet and knuckles, but its immense size, strength, and speed allow it to effortlessly obliterate people, vehicles, and even structures.

When Elizabeth was imprisoned in Columbia, Songbird was created for the sole purpose of keeping her imprisoned within her Tower, and became the most feared creature in the city. During that time, it was Elizabeth's only companion, bringing her such things as books, toys, food, and drinks. Although it held her captive, the creature was her caretaker and protector. As a child, Elizabeth viewed Songbird as a friend, but later came to hate it for keeping her imprisoned. When she escapes, Songbird's intent is bringing her back, even if it means destroying anyone and anything near her, including Booker DeWitt and even the tower that she's kept in.

Its name derives from the tune that plays on a steam calliope organ in Elizabeth's room in the Tower on Monument Island whenever Songbird arrives.

Songbird begins pursuing Booker and Elizabeth the moment she escapes from her room, destroying a huge portion of her tower in the process. Though it is capable of sundering entire portions of Columbia by ramming into them and emerging unscathed, it has one weakness: pressure. Designed for low-pressure environments, submersion in a few fathoms of water critically injures it in a short span of time. This weakness allows Booker to escape from Songbird once he falls into the waters of Battleship Bay.

While inside an elevator on their way to the Hall of Heroes, Elizabeth explains and demonstrates her ability to control tears by opening one to a windowsill. However, the Songbird of the Columbia she opened the tear to emerges out on the other side of the window. Before it can attack, though, Elizabeth closes the tear, revealing a propaganda poster of the Songbird in its place.

Once Booker and Elizabeth finally reach their airship, The First Lady, after the revolt at Fink Manufacturing, they begin to fly out of Columbia. Suddenly, a statue on the ship calls Songbird by playing a specific tune built into it. Songbird flies by the airship as Booker and Elizabeth frantically try to make it go faster. Songbird then attacks it and destroys it, causing them to crash land in the streets of Emporia at Port Prosperity.

At the end of Grand Central Depot, Elizabeth and Booker look for a code to unlock an elevator. Yet another statue plays the tune, which alerts Songbird to their location, and they barely escape detection. Elizabeth is shaken and dismayed by the encounter, and to console her, Booker assures her he will stop Songbird. Elizabeth responds that he can't possibly defeat the creature, and that if it came down to it, she would rather make Booker kill her than let Songbird take her back.

As Booker and Elizabeth pass the gate into Comstock House and head for the bridge, Songbird launches a surprise attack, flying from below and pinning Booker. It then grabs and throws Booker through a nearby building, quickly tearing its way inside to finish him off. Before Songbird can do so, however, Elizabeth yells out an apology, begging Songbird to take her back to the tower and spare Booker's life. Appeased, Songbird carries Elizabeth to Comstock House, where she is indoctrinated over the course of several years.

Songbird is not encountered again until Booker and Elizabeth take over Comstock's airship, The Hand of the Prophet. Through a note written by her future self, Elizabeth realizes she can control Songbird by playing the notes C, A, G, E to it on a device called the Whistler, found in every Songbird Defense System statue. She and Booker use Songbird to defend against a Vox Populi attack on the airship, then to destroy the Siphon which had been limiting her powers.

Upon the destruction of the tower, the resulting electrical feedback disables the Whistler as an enraged Songbird flies back to reclaim Elizabeth. Now fully in control of her powers, she transports the three to Rapture's Welcome Center, trapping the creature out in the water. Crushed to death by the pressure of the ocean, Songbird accepts its fate as Elizabeth comforts it in its final moments.

When Elizabeth infiltrates Jeremiah Fink's laboratory beneath the Factory, she searches an area where she learns about how Songbird came to be. She comes across a prototype of Songbird's head, responding to a projection film. She spots evidence of the different methods in which the Columbian scientists tried to get the creature to bond and failed. Finally, she finds a projector in a small room. Upon using it, she learns that when she was just a child, Songbird had crashed into her tower, causing the tube to his oxygen supply to disconnect. After Elizabeth helped him out by reconnecting the tube, he offered his friendship to her, creating a bond that Elizabeth refers to as "The lion with the thorn in its paw".

Later on, after obtaining the Hair Sample, Elizabeth returns to The First Lady's docking point, only to see the ship fly away with her former self and Booker on it. When the vessel is no longer in sight, the Songbird's screech can be heard, indicating that he has attacked the airship. 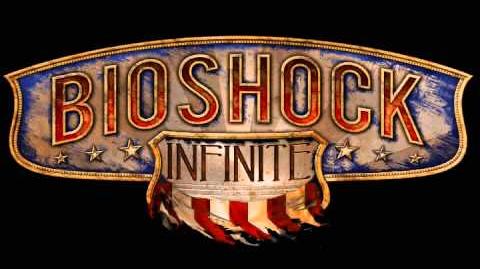 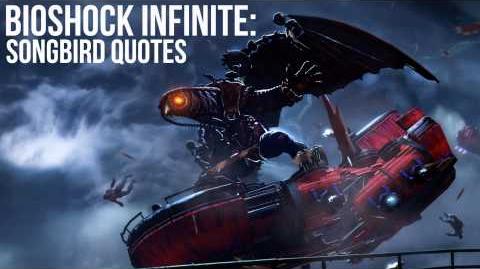 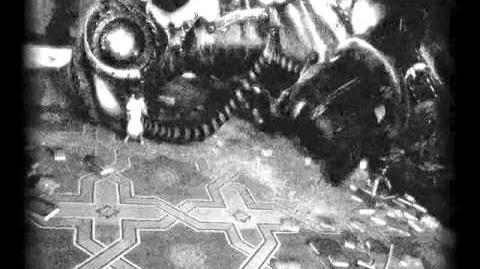 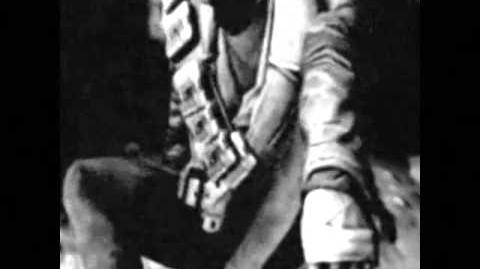 Very early art of a "Mothman" Automata enemy concept, which became revised as the Songbird.

Concept art for the Mothman in flight. 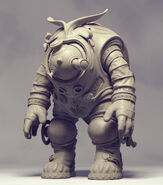 Model for the Mothman, by Adam Bolton.

The Mothman model from different angle. 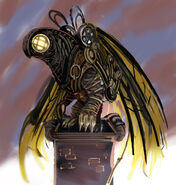 The first concept for the Songbird in flight. 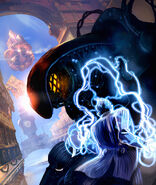 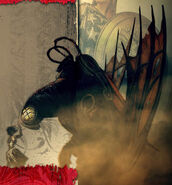 Art concept of Songbird with Elizabeth.

An orthographic of the Songbird. 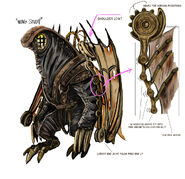 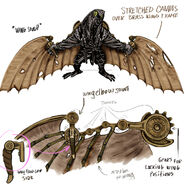 Concept art for the Songbird's wings.

Concept study for the back of the Songbird's wings. 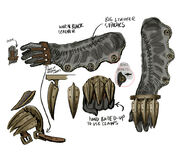 Concept art for the Songbird's arms.

Concept art for the Songbird's harness. 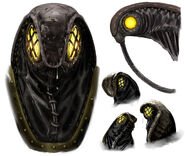 A concept idea of how Songbird would have looked after a young Elizabeth.

Elizabeth and Songbird encounter from the point of view of Booker. By Dan Milligan.

Songbird, as seen in the BioShock Infinite Debut Gameplay Trailer.

Songbird, as seen in the E3 2011 Gameplay Trailer, in a neutral mood.

Prelaunch image of Songbird in flight, with Booker pursuing.

Art of Booker fighting Songbird with a Hand Cannon. 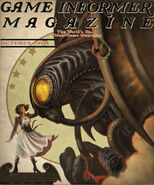 Songbird, as appeared in the October 2010 cover of Game Informer.

Songbird as seen on the BioShock Infinite: Limited Edition Guidebook.

The Songbird as it appears on a Steam Trading Card. 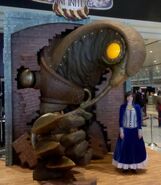 Songbird at PAX East with "Elizabeth."

A 9-inch statue of Songbird, only available in the Ultimate Songbird Edition of BioShock Infinite.

Songbird as a chocolate treat.

Concept art of the Songbird plush.

A real-life Songbird plush similar to the one in the game.

Vitruvian Songbird, a Steam profile background. This drawing can be seen without a vignette in the Burial at Sea DLC.

Render of the Songbird toy model.

Songbird suddenly appears in the overcast.

Narrowly avoiding an attack by Songbird.

Songbird heads for an Airship.

Songbird peers in through a window in Emporia as Booker watches.

Close up of Songbird's talons.

View of Songbird from the back.

Replica of Songbird and Big Daddy.