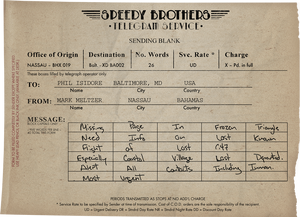 Speedy Brothers Telegrams was a telegram company through which Mark Meltzer has sent telegrams on several occasions during the There's Something in the Sea storyline. The first time was when Mark requested assistance from all of his contacts on October 2, 1968 to analyze a crate of masks found in Lutwidge's basement workshop. The second was on November 22 when Mark sent a telegram to Phil Isidore requesting information from a page that was torn out of The Frozen Triangle, and the third was on December 16 to contact Dash H. Carmady with an offer to search for Celeste Roget. Carmady then replied with another telegram warning that a message from Celeste might be a fake.

After October 2, fans who had sent in letters to Mark Meltzer's P.O. Box began to receive telegrams, delivered in person by Speedy Brothers employees riding old-style bicycles. This was the third such promotional mailing, after the mailing of childlike drawings from the Lunchbox Puzzle and the vinyl records of "Rise, Rapture, Rise."

Fans who received a telegram began to receive packages one day later. These packages contained a copy of Mark Meltzer's letter to his contacts, as seen on the Something in the Sea website, and samples of Splicer masks that will appear in BioShock 2. Fans who were not home to receive their packages of masks the first time were sent another mask at a later date. These late masks came with a letter from Elizabeth Tobey, 2K Games' community manager.

Reply telegram from Dash to Mark.

Jester Mask, received late.
Add an image to this gallery
Retrieved from "https://bioshock.fandom.com/wiki/Speedy_Brothers_Telegrams?oldid=291768"
Community content is available under CC-BY-SA unless otherwise noted.