Transcript: Some of the boys in the code pit whipped up a real doozy of an entertainment: Monitor screen hooked into a sort of... tiny airplane cockpit, yeah? And that's swell, because what shows up onscreen is an X -- that's you -- and a bunch of Os, like a Spitfire surrounded by a squadron of Jap Zeroes. You fly your little X around and shoot'em down one after another. Wahl caught us at it one night, called it a waste of time. I dunno. On balance, ain't it better to change what's on a screen than just to stare at it?

Location: Next to the computer terminal featuring the Spitfire minigame, on the second floor in the Programming wing's Data Processing. 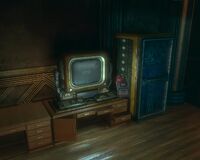 Retrieved from "https://bioshock.fandom.com/wiki/Spitfire_(Audio_Diary)?oldid=239980"
Community content is available under CC-BY-SA unless otherwise noted.