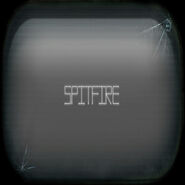 “Some of the boys in the code pit whipped up a real doozy of an entertainment: Monitor screen hooked into a sort of… tiny airplane cockpit, yeah? And that's swell, because what shows up onscreen is an X — that's you — and a bunch of Os, like a Spitfire surrounded by a squadron of Jap Zeroes. You fly your little X around and shoot'em down one after another."”
― Johan Mordhagen[src]

Spitfire is a computer game created by computer coders and a minigame featured in the level Operations from the Minerva's Den DLC for BioShock 2.

Possibly the first video game in history, Spitfire was invented by colleagues of Johan Mordhagen. He played the game and mentions it in his Audio Diary Spitfire, giving an overview of the game and such. Reed Wahl criticized the invention as a waste of time.

The minigame can be accessed from a computer terminal in the Programming wing of Operations. In the minigame, the player controls an X on the terminal screen. The objective is to score points by shooting incoming O's while avoiding contact with them, as well as their projectiles. Surpassing the highest score, 9999 points, triggers the kill screen. There is an Achievement/trophy for beating the high score, simply called "High Score."

“In Minerva’s Den, there’s the world’s first video game, in theory, because there’s a video game down there and it was from the ‘50s or whatever. It’s called Spitfire. I don’t know if you found it when you played it, but it’s like a vector graphics, like an Asteroids kind of thing. It’s playable, the idea being that it was a super simple representation of a fighter plane in World War II shooting down enemy Zeros. In Gone Home, we wanted to make Super Nintendo cartridges that we put in the game, so one of them is called Super Spitfire. And the publisher is CMP Interactive, which stands for [Minerva’s Den protagonist] Charles Milton Porter, because he survived and made it back to the surface. As for how Super Spitfire could have ended up coming to fruition, Gaynor theorizes that, 'the art is very Japanese-style art, so what I think happened is [Charles Milton Porter] did start a computer company when he got back to the surface, and it’s been 50 years or something, so probably the company that he started licensed the IP for that game to a Japanese company, which then made a Super Nintendo version of it.”
― Steve Gaynor, 2K Marin

Title view.
Add an image to this gallery

Retrieved from "https://bioshock.fandom.com/wiki/Spitfire_(Game)?oldid=311881"
Community content is available under CC-BY-SA unless otherwise noted.