“Hey there, fellas. You know that nine out of ten ladies prefer the athletic man? Why stay on the sidelines when the new SportBoost line of Plasmids can turn you into the jock you've always wanted to be?”
― Announcement for Sportboost[src]

There were many sports in Rapture, after all, the city was built on principles of opportunity, individualism, and competition. With values such as these, it is no small wonder that athletics were one of the primary forms of entertainment and recreation in the underwater city. These pastimes ranged from physically exertive activities like a football game at the stadium to more skill-focused diversions like shooting sports down at the Rapture Firing Range.

The Rapturean ideal was one of strength and superiority. Various businesses enabled citizens to keep in peak physical condition. The Adonis Luxury Resort had a spa-quality pool in which visitors swam laps while Jack Frost's Village in Fontaine's Department Store offered a large ice rink for skating.

Of course, the most important virtue in the underwater city was commerce, and the sports industry offered various ways to capitalize off games and exercise. Gambling was not illegal in Rapture, so whether it was a weekly boxing match at The Fighting McDonagh's Tavern, a horse race down at the track, or the annual Rapture Cricket Championship, there was always some event to bet on. There was big money to be made by owning one of the many football franchises in Rapture. Others like Fontaine Futuristics found profit in sponsoring events like the annual Rapture Open, and used it as a way to promote its products.

The introduction of ADAM to Rapture society would elevate and ultimately destroy the sports industry. At first, it seemed like a match made in heaven as genetic modification via Gene Tonics like SportBoost and Armored Shell permitted athletes to fight harder, move faster, grow stronger, etc. Competitors like Danny Wilkins were able to far surpass records set by ordinary men and women. However, this lead to controversy as some felt the Plasmid business ruined the fairness of competition.[1] However, the far greater damage was caused by the mutations and insanity from excessive Plasmid use. At least one confirmed individual was killed as a direct result of an athlete's Splicing.[2]

The Rapture Civil War was the final nail in the coffin. Initially, public announcements attempted to alleviate panic by promoting normal activities. The public was encouraged to take in a sports game and carry on as normal, but a terrible fire at the stadium left dozens of people killed or injured. Afterwards, civilized society shut down and sports equipment was used exclusively as improvised weapons as the city descended into madness and war. 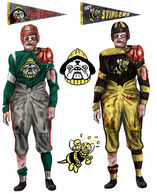 Concept art of the Sea Bulls and the Stingers uniforms. 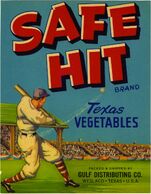 The image that inspired the ad for the Apollo Argonauts.