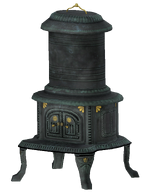 Springfield is a heating and ventilation company in Columbia. Springfield produced furnaces and fireplace mantels, made from material like hearth wood, for the homes of citizens.

A Springfield branch is located in New Eden Square of the Town Center. Booker DeWitt can spot the business when he waits for the parade float to pass by, so he can cross the bridge. Springfields is part of the same complex of buildings as the Grocery, Patriot's Pride and Wilson Bros. & Company Bottling Works, but is inaccessible due to its placement and also appears to be closed.

Another Springfield store is found in the Market District of Downtown Emporia. The business is located in between Wilson Bros. & Company Bottling Works and Patriot's Pride. The store is blocked by one of the furnaces produced by the company, stuck in the door, indicating internal vandalism from the Vox Populi. The business' sign has been torn down and a furnace lays outside.

Retrieved from "https://bioshock.fandom.com/wiki/Springfield?oldid=316872"
Community content is available under CC-BY-SA unless otherwise noted.