For the character in BioShock Infinite, see Stanley.

“I uh… met with Sinclair today, of 'Sinclair Solutions.' …And he's got work for me, right? I ask what, and he flashes me these thousand dollar Steinman teeth, sayin' this job'll quote 'change history' end quote.”
― Stanley Poole[src]

Stanley Poole is a character in BioShock 2. A former reporter for the Rapture Tribune, Stanley was used by Andrew Ryan to infiltrate Sofia Lamb's Rapture Family prior to the Civil War. He was instrumental in the fall of Dionysus Park, after being put in charge of it for a time. Poole extorts the aid of Subject Delta to clean up evidence of his destructive misdeeds in the area.

While working for the Rapture Tribune, Stanley Poole became associated with Augustus Sinclair, who began paying Stanley not to expose and report on any of Sinclair Solutions' unscrupulous secrets. Sinclair offered Stanley a job that would "change history",[1] which involved providing Andrew Ryan with proof that Sofia Lamb's ideology was a dangerous political movement needing to be suppressed. Ryan wanted Lamb's activities in Dionysus Park exposed, so that Lamb could be taken out of the picture.

Sinclair used Stanley to infiltrate Lamb's supporters inside the park.[2] Stanley convinced Simon Wales, one of Lamb's higher-ranked members, that the Rapture Tribune was suppressing his real journalism about Rapture. Even Lamb seemed to be convinced that he genuinely wanted to join.[3] While in "The Family", Stanley was under intense pressure from Ryan's operatives (who wanted immediate results), and from young Eleanor Lamb, who became suspicious of him.[4] Stanley anonymously reported Sofia Lamb's plots to take control of Rapture, resulting in her detention at Persephone.[5]

Around the same time, a deep sea diver from the surface accidentally discovered and entered Rapture.[6] This man was accepted into the city and became something of a celebrity for his heroics, gaining the nickname "Johnny Topside" in articles in the Rapture Tribune, and Stanley's respect. Andrew Ryan did not trust the visitor's story, and was convinced the explorer must be a government agent sent to spy on Rapture. The man eventually was incarcerated at Persephone Penal Colony.

After Lamb's disappearance, Stanley was put in charge of Dionysus Park. He used his new privileges to throw wild parties at Lamb's expense. When Eleanor threatened Stanley with telling her mother what he was doing, Stanley sold Eleanor to a Little Sister's Orphanage, not knowing her fate was to become a Little Sister. Then came word that Lamb had escaped her detention. Fearing members of the Rapture Family would tell Sofia Lamb of his conduct in Dionysus on her return from prison, Stanley exploited a dangerous flaw in Dionysus Park's construction,[7] flooding the park and killing all witnesses to his misdeeds.[8]

After Andrew Ryan was killed, and Lamb began her rise to power, Stanley found himself imprisoned within his lie and had no choice but to work for Lamb and the Rapture Family.

After Subject Delta drains Dionysus Park to save Sinclair, the Little Sisters begin exploring the park to collect ADAM for Sofia Lamb. Stanley Poole, who has locked himself in the control booth of the Atlantic Express station, does not want this, as the ADAM contains memories from the corpses there. If Lamb obtains the ADAM, he fears the secret of his betrayal will be revealed. By blocking the train, Stanley forces Delta to prevent the Little Sisters from gathering ADAM. Delta cannot advance towards Eleanor until he completes this task.

With Eleanor's telepathic help, Delta views the memories within the gathered ADAM, seeing the events as described above. Once all the Little Sisters are gone, Stanley unlocks the train path so Delta can proceed. Delta and Stanley discover, via Lamb's radio transmission, that Sofia Lamb knew of Stanley's actions all along. She says she had forgiven him, since his actions in having Eleanor turned into a Little Sister became a blessing in disguise for Lamb's grand utopian scheme. Because he helped Delta, Poole interfered with Sofia's plans for Eleanor, and she tells Delta that Stanley was the one who turned in him to Ryan. Opening the control booth door, Sofia gives Delta the option to have his revenge, and it is left up to the player whether or not to kill Stanley. The result of this decision will have an impact on the game's ending.

When Subject Delta takes control of a Little Sister later in the Cell Blocks of Outer Persephone, he sees a statue depicting the way he treated Stanley Poole. If Delta has spared Stanley, the latter will be kneeling before Delta, who in turn will be holding his hand showing mercy. If Delta took revenge upon Stanley, Delta will be choking him with one hand. 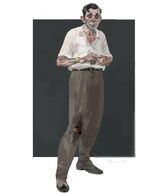 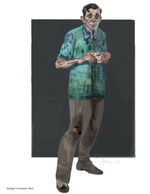 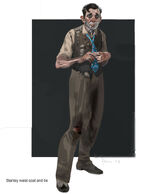 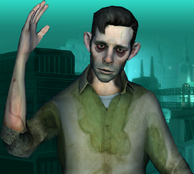 Stanley Poole as a 3D model.

Stanley Poole's statue in Outer Persephone if the player spares his life. 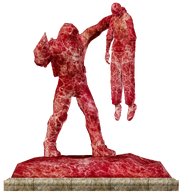 Stanley Poole's statue in Outer Persephone if the player kills him.

The newsman initiating the flood.