Taking the Taint Out of Fontaine is a video for the Need to Know Theater that appears in the BioShock Infinite downloadable content Burial at Sea - Episode 1. The film focuses on the recent death of Frank Fontaine and the nationalization of Fontaine Futuristics. The machine exhibiting this film is located above Le Temps Perdu.

A second Need to Know Theater production of the same film was located in the Test-Drive area of the Bathyspheres DeLuxe in Fontaine's Department Store. The film was modified by Atlas to be used as a propaganda piece to gain favor with the Splicers and prisoners.

Transcript: Are you in the know? You've doubtlessly sampled products from Fontaine Futuristics. But do you know why Ryan Industries saved it? Frank Fontaine, business leader and benefactor of mankind? Or was he the best friend the Parasite ever had? Were you aware his businesses were a front for a smuggling ring? And were you also fooled by his supposed "charity work"? At his free clinic, patients became test subjects. And his orphanages were places that children disappeared into and never came out. Once they learned the truth, Rapture Central Council called for the arrest of Fontaine Futuristics' owner. But, a coward to the end, Fontaine found a hail of bullets preferable to facing justice. The Council asked that Ryan Industries assume the burden of stewardship of Fontaine's ill-gotten assets. And Andrew Ryan accepted that burden for the people of Rapture. Now all citizens can enjoy these products, free of criminal taint. Now you know.

Location: On the very top of the stairs, above the Le Temps Perdu next to a fountain. 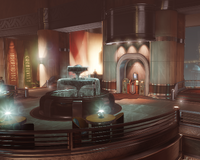 Retrieved from "https://bioshock.fandom.com/wiki/Taking_the_Taint_Out_of_Fontaine?oldid=316117"
Community content is available under CC-BY-SA unless otherwise noted.