Why I Hate Wiki's[edit source]

Okay, so I put up the extensive merger of 75.6.222.220's vandalism with the original. Basically, 75.6.222.220 has the issue of fanboyism, wanting everyone to Harvest, and atrocious grammar (not claiming I'm perfect either but...). Oh, and he replaced the entire article. (And yes, I replaced it aswell)

A revert would have worked but the previous version wasn't much better.

Basically, spoilers (especally methods for beating a "boss") should be avioded, I reincorporated and rewrote the section so that it explains how Bioshock's environment can be used in combat. (A note: Unlike SystemShock, Hacking in bioshock freezes the game... you need not stun an enemy to hack a console)

Blatant Praise is more annoying than useful. Reading "OMGz BIOSHOCK is the BEST GAME EVAR" is more likely to make people think otherwise than expanding the current article. Explain why bioshock is "awesome" if it is truely great then you should be able to paint that picture with words... not leave me wondering if its just a fanboy thing.

I think 75.6.222.220 made most of these type edits but... [soure_text|descriptive_text] the descriptive text should allways be similar to the source text, changing the U-Invent to "a vending machine" is confusing, Wiki's LOVE to link to eachother, and if someone wanted to know what a U-Invent was they would click the link, or there could be text explaining it... but you shouldn't go renaming the World of Rapture. (And it's not a spoiler to tell people there are "little sisters" and "Big Daddys" in the game...)

There were various other aspects, including a few repetitive lines (Mainly talk about Plasmids and EVE). Out of context thoughts (parethises are okay in conversation, but try to incorporate the words phrases instead of separate them). Some personal opionions and some general confusion caused by rushed writting.

I didn't work on expanding the article, mainly removing everything that was... bad... and trying to organize it into a more concise format... eitherway, what I wanted to point out was whether this gets reverted or not, it was a bloody lot of work. If you want to expand a wiki thats fine, but blatantly rewriting it without even discussing your rewrites... Meh, it's your problem now... I was just putting up my edits to the page before the server went down. (or I got banned, perhaps) 64.238.178.124 18:25, 15 March 2009 (UTC)

This FAQ has the details.

There is not one here yet, but is there a need for a page of trailers? If so, We should make sure that the ones we get are the highest possible quality, preferably from the official sites.

Call of duty 5's nazi zombies has many features similair to BioShock. the zombies are like the splicers in many ways, through both creation and look, the teleports look remarkably like the vita-chamber, the perk soda's come in almost exactly the same way as plasmids and gene tonics ect, the pack a punch machine is the power to the people machine . there are many simalarities between the two but it is missing some major things like big daddies and little sisters which would be in breach of copyright law.

I have noticed the prominence of needles and syringes in both games. But is this actually safe? Wouldn't the constant injections cause some sort of internal damage over time? Just wondering.

Watching a speed run, the guy didn't save or harvest any of the little sisters, and he got the good ending. Should this be included in the article?Brainwasher5 (talk) 20:26, February 14, 2014 (UTC)

"Would you sacrifice your humanity?"[edit source]

From The original trailer

Why must you criticize everything?

You can pass judgment and critiques all you want but to add onto Unownshipper's question, why would you criticize everything here, on this wikia, instead of say a forum or blog? To see if there any like minds? The first game and its sequels are various years old, finished products and acclaimed by many, and disliked by a number, just with any work of fiction. There may be others who voice your same opinion but I've yet to see any on this wikia. Those who are seemingly parallel in your view eventually fall into a compromise of sorts or just let it go, not persistently go about ranting in a community meant to document. The gaming industry is a fickle b*tch, you can't claim you understand the gaming industry, especially behind a computer screen. You can call out credentials and education and status, but it doesn't translate into a thing online. As far as anyone is concerned, you, I, and anyone else are just fans or fanatics of a series we've grown to like, love, or with some, hate. 161.38.221.223 22:29, August 22, 2014 (UTC)

You still haven't answered my question. Given your explanation, you're speaking to companies through this wikia talk page? Reason I'm responding is because you've been provoking many of this wikia pages in divulging in your opinion of the game rather than documenting the games' elements in which this wikia is meant for. Acclaimed, decclaimed, the BioShock series, if not just the original game, has made it into the hall of fame for games as art, and to this day people are continually experiencing and enjoying the game, and vice versa, people are experiencing and disliking it. You cannot deny that it is memorable, not for its flaws but its vigor for lack of better words. But I don't understand who you're preaching to here. No need for hostility, I am honestly trying to understand your purpose for continually berating minute elements in the game, the story, the mechanics, everything. We appreciate your contributions to various pages but what you say in te talk pages are contrary when its just meant to belittle something. 161.38.221.223 23:55, August 22, 2014 (UTC)

To my dear and respected contributor,

I will never and have never argued that you don't have a right to voice your opinion. On the contrary, I appreciate that you take an alternative position from the vast majority on the site (even if I don't always say so), as counterpoints are what stimulates a discussion.

Many of the points you've raised on different pages have elevated me from raving fanboy who sees BioShock and it's sequels as "the best game ever" to an individual who can view the games fairly objectively by noting their strengths and weaknesses.

The only fault I find is your approach. Some criticisms against BioShock truly need to be addressed, but, for the sake of effectiveness, we shouldn't sweat the small stuff. This, discussion for example, is over a simple quote at the top of the BioShock page.

One's voice grows less impactful if they constantly raise objections on every detail. Instead, it makes your audience (the other contributors on this Wiki and I) less inclined to listen to what might otherwise be a valid point (or we just get irritated). I believe everyone needs to pick and choose their battles, so most of the time I just pass it off as not worth arguing over. Other times, I get frustrated. So I apologize if I offended you with my reply and hope you will consider this post as food for thought.
Unownshipper (talk) 05:16, August 23, 2014 (UTC)

I've noticed that while some of the character pages like Booker DeWitt and Frank Fontaine have rather sizable Personality sections, other characters lack it. I'm sure this applies to other instances for other pages like locations or timeline, etc. but is there a kind of template that we should follow as for things to be more uniform? Tricksteroffools (talk) 00:05, October 31, 2014 (UTC)

The personality section for these two characters is extensive as we get to know them over a long period or multiple games. Other characters (though they may be important to the story) we don't get enough time with them to write as detailed a personality. For example, Jack implicitly has no personality of his own, Andrew Ryan is meant to mirror the philosophy of Objectivism rather than be a fully fleshed out human being, and Charles Milton Porter, though devoted to his wife, is never shown to have any other personality characteristics in his Audio Diaries.

To my knowledge, there are no templates for a proper personality section, just do your best to try and mimic the ones on the other pages.

On my resent search through the internet for more BioShock info, I decided to go to BioShock's official homepage and entered the Xbox 360 and Windows version of the site and pressed the section called "Enter Rapture". The page has "brochures" of 6 locations in the city: Kashmir Restaurant, Medical Pavilion, Neptune's Bounty, Fort Frolic, Arcadia and the Farmer's Market. each Brochure has a description, 7 pictures and a video, introducing the locations. Medical, Neptune's, Frolic, Arcadia and the Market where pretty much the same as in-game, but the pictures and video for Kashmir and Medical where taken from an older version of both locations. I don't know if this is known, but I thought I'd share it here anyways.
http://www.bioshockgame.com/site/us/

Yes, I see what you mean. These were clearly made before the final launch of the game most likely to give prospective customers a look at what was to come (heck, the Gene Bank is still labeled Plasmi-Quick). I don't know, but the Kashmir Restaurant actually looks a little bit bigger than in the retail version.

There are several images on this site that are clearly "Prelaunch/Promotional" pics as well. I've been trying to figure out how categorize these so that people don't mistake them for actual final images. Some are obvious, others aren't. The images with the Jack holding firearms have accidentally been labeled "Low-Quality" for having the HUD visible when that was actually the intention. 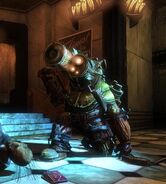 "Promotional Images" is too vague and will attract a lot of other images that don't go with this set. "Prelaunch Images" is better, but I wonder if people might accidentally add concept art.

I'd also say its a bit bigger, even seems to have three floors! And yes "Promotional" would probably cause confusion so I'd say "Prelaunch" or "Early Images/Models". We also need a category page for the pictures, and that will of course be made as soon we figure out a proper name.

Added a few Images so they will be easier to find when needed. I Will add more if found.

Well how about "Prelaunch Images"? We certainly need a category page for these images.

I like the idea of a (specifically, only one) link to games like BioShock. It can be helpful for interested readers looking for something that might be in the same vein as our beloved BioShock, and if it's to be placed on this site, this seems like the page for it. However, I have serious concerns with the page this link connects to. There are several grammar and syntax mistakes that make the content almost unreadable, discontinuous capitalization, and one game is listed twice! Maybe we need another one other than this

It sounds great, but we do need a good article for this. The one that is link is not acceptable, in my opinion.

Irrational put the original proposal for BS up a while ago (From the Vault) and was checking to make sure that someone doesn't have it up on the wiki already. I looked around but didn't see it. But also could have missed it. sm --Solarmech (talk) 16:15, January 31, 2016 (UTC)

I'm 90% sure it's not here yet. I suggest that you post it at first as a blog post so that we can see it and then later as an article if we decide as a group that it's worthy of a such a page.