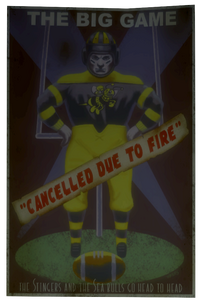 I'm fairly certain I've finished all the Attacking and Upon Killing the Player lines. I've run him repeatedly in these situations and he only keeps saying these lines. I also think the other sections are finished EXCEPT "Hears Player" and "If the Player Runs".

There are some sections that are entirely missing. "Returning to Idle" is missing (what the char says after giving up Searching for the Player) and "Using a Health Station". I am having a hard time following piggie around because other splicers spawn and start chasing me and their shouting covers up his. I don't think he says anything while on fire, but the tests I did weren't near water, so they may only say their "On fire" lines when they're heading to water.

Summary: need to fill out/create sections "Hears Player", "If the Player Runs", "Returning to Idle", and "Using a Health Station". Also check if he says any lines while on fire and heading to water (are there any puddles of water he can head to in this level?) Clicketyclick 15:41, March 21, 2010 (UTC) 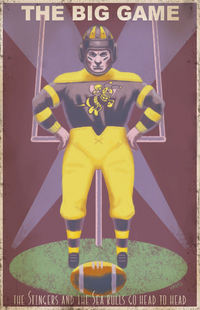 In college football, the most competitive rivalry in the state of Georgia is between the University of Georgia (UGA) and the Georgia institute of Technology (GA Tech). UGA's mascot is the Georgia Bulldog while Tech has the Yellow Jackets. Could the creators of BioShock have been thinking of these Southern teams when they came up with the football franchises the Sea Bulls and the Stingers? Food for thought.

Retrieved from "https://bioshock.fandom.com/wiki/Talk:Pigskin?oldid=209165"
Community content is available under CC-BY-SA unless otherwise noted.