“What a night I got lined up. Everything's ready. Flowers, bottle of wine, even two tickets to the Tea Garden. Nothing gets the betties in the mood like nighttime in Arcadia.”
― Dieter Sonnekalb[src]

The Tea Garden was once one of the most romantic places in Rapture, and it was a main paying attraction of Arcadia. The flowering trees and gentle streams of the Tea Garden were designed to be soothing for many citizens who missed the calm parklands of the surface.

Rapture required all the basic necessities that any functional habitat demands: water, oxygen, shelter, etc. The city also needed places where its citizens could relax and unwind; the Tea Garden was one such place. The pressures of living in any major metropolitan area, much less a secret one hidden miles beneath the sea, are enough to affect any individual. To decompress, many sought the placid serenity of the Tea Garden's verdant foliage, babbling brook, and generally tranquil atmosphere.

While the area itself was large and spacious, the garden was designed with many intimate spaces for visitors. The enclosure gained a reputation as a favorite destination for amorous couples. Others might enjoy reading a book or the newspaper on a park bench, picnicking along the stream, or taking a stroll along the stone pathways.

Some enjoyed the space so much, they chose to remain there forever. In the very rear of the space is a small Memorial Garden. Graves and mausoleums mark the final resting place of several Rapture citizens whose loved ones chose a more permanent place of internment than a burial at sea might offer. Still, the Tea Garden was more than just a place to lay back in the grass. The facility includes several storage and preparation spaces for Arcadia's staff of gardeners, groundskeepers, and researchers to tend to the wide-ranging flora.

While the Tea Garden was initially a very popular spot, crowds would begin to dwindle as time went on. First Andrew Ryan turned Arcadia into a private park, meaning individuals would have to pay to get in. Then, the effects of excessive ADAM use lead a number of elite, demented Rapturians to form The Saturnine cult. They conducted bizarre rites, attacked citizens, and made the "Rapture's Vacationland" a dangerous place. The final nail in the coffin was the Rapture Civil War which lead to the ultimate closure of Arcadia and all the businesses within it.

Following the devastating events in the Smuggler's Hideout, Jack finds himself in a secret tunnel leading to Arcadia. Atlas is left inconsolable over the loss of his family in the explosion, but his grief quickly turns to unmitigated rage. While Ryan gloats, Atlas gives Jack a new mission: reach the Rolling Hills and get to the Bathysphere in the Rapture Metro.

Jack breaks the padlock and finds himself emerging from a tomb along the west wall of the Memorial Garden. There's an eerie calm amongst the fallen grave markers and overgrown plant life. In the center rests a small mausoleum, which now lies in partial ruin. Headstones can be found littering the area. On the east wall is a sealed tomb which Jack can access by lighting torches with Incinerate!. Crates of smuggled goods and invention components can be found in the tomb.

The main garden resembles a small park. It contains a waterfall, a small stream with a quaint wooden bridge, and park benches to simulate life above the surface. The ceiling and sprinkler pipes are painted to resemble blue skies with puffy clouds. Large ventilation grates can be seen on the walls circulating air through the space. A table, some chairs, and a broken bottle of Arcadia Merlot can be found in the stream along with a Corpse that looks like it was drowned in the water. The body is possibly that of Angelina, evidence of a bad date with Dieter Sonnekalb.

Further ahead is the Tea Garden antechamber. This smaller area decorated with several large boulders contains more seating beneath a causeway. On one end, someone enjoyed a book and a smoke sometime before the Rapture Civil War. On the other end is a bench where hints of Dieter and Angelina's date play out in ghostly memories. The path to Arcadia Glens is blocked by fallen timbers and overgrowth.

The final area in the Tea Garden is the employee storage room. The lower area contains work stations, planting supplies, and gardening tools. As Jack nears the area, he hears several desperate cries for help. He goes to investigate but finds things are not as they appear. Jack comes face-to-masked-face with a Houdini Splicer belonging to the Saturnine cult.

He finishes the deceptive Splicer upstairs on the second floor. Here there are many closets and crawlspaces filled with groundskeeping utensils. Entering one triggers a Leadhead Splicer to appear. In the east side, there is a table with beakers and the audio diary Arcadia Closed. This is most likely one of Professor Langford's research stations. Next to the table is a Gene Bank.

A causeway connects one part of the upper floor with the other. While the dulcet tones of Django Reinhardt's Jitterbug Waltz plays over the P.A. system, a Thuggish Splicer searches through some pots on the opposite end while a Leadhead perches on a parallel balcony.

Crossing the catwalk over to the west side, Jack can find a Circus of Values, a Health Station, and a number of malfunctioning sprinklers inside a planting room. Several Splicers patrol the room while a single Machine Gun Turret protects a crawl space to the balcony with the Dr. Grossman Splicer. Posters of Atlas and gardening supplies can be found hanging from the walls. Electro Bolt can be used on a malfunctioning closet door housing useful supplies. A crawlspace houses various items including Bandages, Pistol Rounds, a dead cat, and a Safe containing 5 Antipersonnel Auto Round, 40 Napalm, and an Empty Hypo.

Jack heads down a set of stairs and is back on the lower floor of the storage area. The room is full of wheelbarrows, piles of soil, bags of fertilizer, and other potting supplies. Off to one side, a corpse is half buried in a shallow grave, evidence of a murder and a hasty cover-up. Jack dispatches with a Thuggish Splicer and makes his way over to Arcadia Glens. As he approaches the promenade, he can hear a Lady Smith Splicer screaming in fear of the approaching Saturnine; things are only going to get worse as Jack journeys on.

In the multiplayer version of Arcadia, the Tea Garden is located directly north of the closed entrance to the Farmer's Market. This version of the garden features a small dilapidated cafe with balconies overlooking a waterfall into a peaceful stream. Birdsong and buzzing insects can be heard among the flowering trees in this scenic area.

The Tea Garden is connected to Arcadia Glens by a pathway and a stream to the west, as well as by a hallway with telephone booths that exits onto a balcony above an RPG Turret in the northwest corner. A door in the cafe connects to the Storage area. Rolling Hills can be accessed by taking the pathway in the northeast corner.

A hypo to refill the player's EVE can be found on a balcony in this area. A broken wall in the southeast corner gives access to a short maintenance tunnel with another EVE hypo and an ammunition pack. The player can pass through the vent at the end of this tunnel to exit by a Circus of Values machine at the entrance to the Farmer's Market. A Big Daddy suit can spawn on a balcony in the Tea Garden or on the path by the stream to the west. The Tea Garden is also the location of a control point in Turf War mode.

Concept art and model for the mausoleum, by Daniel Keating.

An early version of the Memorial Garden, featuring a Rosie Big Daddy. 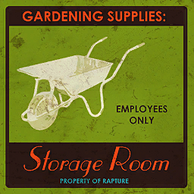 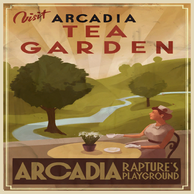 An Advertisement for the Tea Garden from BioShock 2 Multiplayer.

A mausoleum in the Memorial garden, with only one torch lit.

Things didn't work out as planned.

"Rapture's Vacationland" has turned nightmarish.
Add an image to this gallery

Retrieved from "https://bioshock.fandom.com/wiki/Tea_Garden?oldid=322748"
Community content is available under CC-BY-SA unless otherwise noted.