“Pick up big stuff with your mind. Throw them at your enemies. What else do you need to know?”
― Plasmid advertisement for Telekinesis

Telekinesis is a Plasmid that appears in BioShock, BioShock 2, and the BioShock 2 Multiplayer. Telekinesis is an active Plasmid that instantly picks up, draws in, and steadily levitates a movable object. Objects held by Telekinesis can be thrown with great force and distance at the cost of EVE. Objects thrown at enemies will cause heavy physical damage. In addition to its combat capabilities, Telekinesis allows the player to collect items, search containers, and loot corpses that are unreachable by normal means.

Telekinesis was one of the first Plasmid concepts showcased to the general public, as evidenced by the demonstrations shown in Fontaine Futuristics Plasmid showcases. As opposed to some plasmids, whose purposes were either unclear to the general public, or very specific, Telekinesis was a plasmid of which the uses were ubiquitous. Advertisements depicted uses such as lifting furniture during cleaning[1] or even more mundane things such sugaring your coffee and stirring it without lifting your finger[2].

Telekinesis is a Plasmid available in BioShock. It is one of the first Plasmids acquired by the player, and it is necessary to advance beyond a certain point in the Medical Pavilion level. To drop a "held" object, press X or Square.

In Worlds of Hurt, Telekinesis can be bought at the Gatherer's Garden in the central hub for 120 ADAM.

Telekinesis is a Plasmid available to the player in BioShock 2. It is the second Plasmid obtained in the game, after Electro Bolt. As in BioShock, pressing the reload button drops any held object to the ground.

Immediately available at the start. 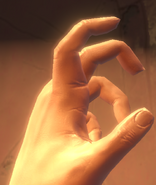 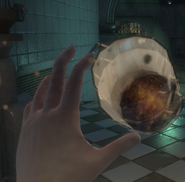 An Advertisement for Telekinesis seen in Burial at Sea - Episode 2.