“You might try where they hock them new bathyspheres. As I hear it, Old Man Winter's the only thing keeps their batteries from bursting into flames after five minutes.”
― Atlas[src]

The Test-Drive of Bathyspheres DeLuxe is where potential buyers would test out the Bathyspheres Fontaine's Housewares department had to offer.

Test-Drive was a place for testing and exhibiting to customers the many Bathyspheres from the Bathyspheres DeLuxe showroom within Fontaine's of Rapture. The facility has its own dock, used only for demonstration and showcasing the products. According to the manager, Kay Flannigan, the newer model Bathyspheres had a dangerous design flaw and tended to overheat. Rather than go public with this information, the company simply supplied a free sample of the Plasmid Old Man Winter with purchase and labeled it as a promotional giveaway.[1] When the department store was turned in to a prison by Andrew Ryan for Frank Fontaine's followers, Atlas' followers used the Test-Drive as a stronghold. While the Manta Ray Lounge was used as a food storage, the Test-drive held items valuable in combat. One of Atlas' men, Felix Molloy, was given a task to come up with where to attack first when (and if) they managed to escape, while he was staying here.[2] Emmett Wyman was sent to the department store, under Ryan Industries, as an undercover prisoner[3] but was eventually caught, tortured and murdered, in the Test-Drive.

Elizabeth enters this area through the main entrance of the Test-Drive and in to the reception. If Elizabeth attempts to access the facility early in the game, one of Atlas' followers will bar her from entering. Later on, in order to fix the vandalized Lutece Device, Elizabeth needs to find some Old Man Winter. She spots the advertising for the Plasmid and heads in. Atlas radioed ahead with his approval and she's permitted in. Elizabeth obtains the Plasmid, but on her way out, Splicers assault the Test-drive and attack Atlas' men, forcing her to defend herself once again.

This was where the customers got information and booked time at the Test-Drive. A large advertisement for Old Man Winter is between the entrance and reception desk. A female Splicer can be found behind the counter along the audio diary This Atlas Guy by Samantha Kemp.

After checking in at the reception, customers would be escorted here where the Bathysphere they favored would have been transported through the airlock and then taken for a test-drive. The sane followers of Atlas have made a makeshift barricade, with a steel door and office furnishing used as extra support, blocking any intruders from entering. Felix Molloy is currently on guard-duty and sits near the door right before the rest of the stairway. The two remaining followers are minding their own business. The interior of Test-Drive has been fully converted into a headquarter filled with supplies, such as knives, gas-masks and crates stacked along the walls. Atlas propaganda hangs on every wall, thanks to the printing machine, and Kay Flannigan's audio diary Old Man Winter Giveaway, sits on a desk close by. A round platform is used as a table for the planning of the attack with Felix Molloy's audio diary For All Occasions, along a map of Rapture used to pin-point locations. Several key targets were suggested, such as Pharaoh's Fortune Casino in Fort Frolic, the Adonis Luxury Resort and the Farmer's Market in Arcadia. The Kashmir Restaurant was ultimately chosen due to the timing. The area has a minor flood, coming from the airlock, that's slowly giving away thanks to the pressure or because it was sabotaged by Ryan to prevent escape. There is an air vent going from here to the Employees Only area, containing Radar Range Ammo, Coffee, a Can of Beans, Tomato Soup and a pile of coins. The vandalized Need to Know Theater Message Received, Ryan! can be found next to a Circus of Values vending machine, near the entrance to the Old Man Winter Display.

The Old Man Winter Display was where the Plasmid was showcased. Citizens who bought one of the new Bathysphere models could redeem their free sample from here. Like Atlas said, the Plasmid is found on the display table.

This Area is found left of the Old Man Winter Display and was used for additional storage and communication. Emmett Wyman's tortured corpse can be found here, tied to a desk, and the words "Company Man" written on the wall in red paint (or blood) behind him. His audio diary Prison Intel, Dispatch #8 can be found in his hand. One of the Coded Messages can be found next to the wireless telegraph devices. The area also contains two Lockpicks, a bottle of Salts and a First Aid Kit.

The entrance hall towards the reception.

The barricaded entrance to the hideout.

The round table of revolution.

Rapture, seen from the windows, far from the department store.

One of Atlas' men stands near the printer.

The wireless telegraph devices, used by the followers of Atlas. 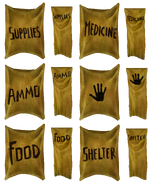 Retrieved from "https://bioshock.fandom.com/wiki/Test-Drive?oldid=320992"
Community content is available under CC-BY-SA unless otherwise noted.