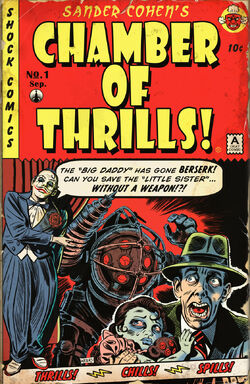 “The "Big Daddy" has gone BERSERK! Can you save the Little Sister"... WITHOUT A WEAPON?”
― The "I" in Team comic bubble[src]

The 'I' in Team is the first of the three challenges from the Challenge Rooms DLC for the PlayStation 3 and Xbox 360 versions of BioShock, as well as in BioShock: Ultimate Rapture Edition and BioShock: The Collection. Set in the Rapture Firing Range, the player's task is to rescue a Little Sister from her Big Daddy protector, without (at first) the use of any weapons or Plasmids.

Enter the Machine Room. Ignore the Big Daddy for now, and run up the stairs to the left. Make sure to check every "Inventing Supplies" box, as you'll need every part obtainable from them to complete the level. Continue through the hallway and enter the office room. Collect the rose from the desk, and enter the door behind the desk. Pull the lever on the left. Ignore the one on the right for now, as you'll need to make an Automatic Hack Tool to use it.

Go down the stairs to the right, and enter the cavern beneath the shooting range. Jump on top of the frozen Big Daddy to reach the Target Dummy plasmid on the other side. Go back up the stairs. Place a Target Dummy in front of each turret, and wait for the RPG turrets above you to shoot and destroy it. (Unless you are aiming for the Pacifist Trophy). Do this for each turret. Place another Target Dummy to distract the RPG turrets as you run across the scaffolding, and reach the other side before entering the door on the far left of the range.

Walk through the tunnel, and enter the Pressure Plate room. Use a Target Dummy to make the Big Daddy step onto the switch, then run into the door opposite. Grab the Winter Blast 3 Plasmid from the desk. Go left, and pull the lever next to the door to enter the Office Room again. Go back to the Machine Room from the beginning of the level. Using a Target Dummy, lure the Big Daddy to stand between the gap over to the ledge where another Inventing Supplies box is. Freeze him, jump on top and reach the ledge. Check the "Inventing Supplies" box to find what (should be) the final part needed to use the U-Invent machine in the Office Room to make an Automatic Hack Tool.

Use another Target Dummy to make him stand between you and the rose on the piping next to the ledge. Freeze him again, and then jump off of him to reach the rose.

If you're still missing parts, then that means you missed a box somewhere. Carefully search the level again, and make sure to check every box.

Hack the right-hand lever in the shooting range to open the door on the right to the Machine Room. The Big Daddy and Little Sister will enter, and the Big Daddy will start running back and forth across the firing range. Using your Target Dummy Plasmid, time the placement correctly to make the RPG turrets shoot him. His death should deactivate them. Before collecting the Little Sister, search his body for a Grenade Launcher and ten Frag Grenades. Use the grenades to destroy the center RPG turret. Use another Grenade to blow it down if it doesn't fall the first time. Search it for the 3rd rose.

Go back to the Pressure Plate room. Use a Target Dummy to make the Big Daddy step on the plate, and then run as quickly as possible through the firing range and back to the Machine Room. There should be a Secret Hatch open directly in front of you. Grab the final rose.

This Trophy/Achievement requires the player only to rescue the Little Sister.

This Trophy/Achievement requires the player to rescue the Little Sister in under 3:00 minutes.

This Trophy/Achievement requires the player to rescue the Little Sister without destroying any of the Turrets in the stage: make extensive use of the Target Dummy Plasmid to draw all of the Turret fire during your first journey through the Firing Range.

This Trophy/Achievement requires the player only to find the four Roses hidden throughout the stage. Their locations are:

Loading screen for The 'I' in Team
Add an image to this gallery
Retrieved from "https://bioshock.fandom.com/wiki/The_%27I%27_in_Team?oldid=321446"
Community content is available under CC-BY-SA unless otherwise noted.