The 13th Muse Pub, or The 13th Muse Tavern is a bar located somewhere in Rapture. Its actual location is currently unknown. There are two places its name is seen. The first is during the Neptune's Bounty loading screens, and the second location is outside the northern window in the Proving Grounds. Seeing as how there is a screenshot of the bar during the loading screen, it can be speculated that the tavern is among the removed content. 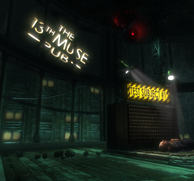 Outside of the Proving Grounds.