“Unlike anything you have ever seen before…”
― Advertisement[src]

The Black Dream is a film that was produced by Sander Cohen and Ava Tate. Posters for The Black Dream can be seen in various places throughout Rapture in BioShock 2 while the movie itself can be viewed via Kinetoscope found in Fontaine's Department Store's bathysphere station in Burial at Sea - Episode 1.

The film presents a dream in which a woman (possibly Ava Tate) encounters a series of people and objects. One of the most notable instances is when the woman perceives the grizzly bear which suddenly transforms into a teddy bear. The film ends with the woman being trapped in a cage before disappearing herself.

Location: In Fontaine's Department Store's bathysphere station. Take the steps and leave the area on the right side. 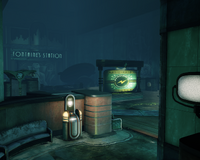 Another variant.
Add an image to this gallery

Retrieved from "https://bioshock.fandom.com/wiki/The_Black_Dream?oldid=306345"
Community content is available under CC-BY-SA unless otherwise noted.