BioShock Wiki
Register
Don't have an account?
Sign In
Advertisement
in: Spoilers, Clash in the Clouds Locations

The Columbian Archeological Society serves as the main hub for the player during the Clash in the Clouds DLC Pack.

When the player begins the Clash in the Clouds DLC Pack for the first time, he or she will be standing behind a counter of a large room of the main hall. On this counter is a Broadsider, the main Pistol for the game. Next to the Pistol will be Booker's Shield upgrade.

On the left of the counter, where the player has picked up both the Pistol and shield, is a stand of Free Samples of Vigors. These include: Undertow, Possession, Devil's Kiss and Bucking Bronco. Once the player has taken each of these Vigors, they can notice five statues in front and to the right of the counter. Each of these statues allows the player to view the leaderboards for all four levels as well as the overall leaderboard.

At the opposite end of the room to the counter, the player will see four pictures on the wall, these act as the entrances to all four different arena maps. The order is (from left to right): The OPS Zeal, Duke and Dimwit Theatre, Raven's Dome and Emporia Arcade.

To the left of these pictures is a corridor that branches off to the right. This leads to the maintenance room—an area that can only be visited once the player has partaken in one of the four arenas. Several souvenirs can be seen on the shelves. Along the left-hand side of the corridor, the player shall be able to save their progress at any time by selecting a book, sitting on the counter of a booth. Further along, also on the left-hand side, will be a Veni! Vidi! Vigor! and Minuteman's Armory vending machine: the Possession Vigor may be used once (and once only) on each machine to obtain some extra silver eagles, as in the main game. Continuing on straight down the corridor, the player shall come to The Museum, a giant trophy room. Upon first entrance, this room shall be quite empty, with only empty plinths, picture frames, Kinetoscopes and Phonographs being the only things of notice. During their time in the arenas, the player shall earn large sums of money, which can be spent on unlocking the various trophies. Citizens of Columbia will be attracted here, once the player purchases something in the museum. Museum ticketing booths can be seen in two corners of the museum.

For the cost of all upgrades for the weapons and Vigors, see Upgrades in Clash in the Clouds.

In the first area the player begins in, there will be four pictures hanging on the wall. These will teleport the player into the four arenas the player can compete in. Only the OPS Zeal will be available to compete in after loading the DLC Pack for the first time. The other three: Duke and Dimwit Theatre, Raven's Dome and Emporia Arcade, shall need to be unlocked by paying a required amount of Silver Eagles. The cost is $250 to unlock Duke and Dimwit, $500 for Raven's Dome, and $1000 for Emporia Arcade. Each arena will pass the player through fifteen different waves of enemies. Upon completing the OPS Zeal for the first time, the player should have amassed enough money to purchase the other three arenas. In each of the four different arenas, players can choose to complete various challenges known as Blue Ribbon Challenges.

Between waves, the player will be taken to the maintenance room, which contains the entire arsenal from the main campaign (except for the Crank Gun). Upgrades for weapons and Vigors can be purchased from the Minuteman's Armory and Veni! Vidi! Vigor! vending machines; as with the machines in the other area, the Possession vigor may be used to obtain some bonus coins from the two machines, but this can only be done once each. Between them is a special vending machine: the Columbian Sundry and Supply, which contains Infusion upgrades and random pieces of Gear. Finally, there is an office door where the player respawns should they perish.

Here, the player can purchase various trophies of characters and enemies found in the game. Some of the models include:

Once the player has purchased both Lutece twins Models, a Tear will be unlocked, allowing access to the Lutece Labs, where five Voxophones can be found. There are also several development and in-game propaganda pictures available to purchase from the various empty picture frames found on the walls. As the player enters, there are six new Kinetoscopes available to purchase, showing certain development stages of the games characters and auditions. Next to these are four phonographs that will play various anachronistic songs found in the game itself, including: "Tainted Love", "Fortunate Son", "Everybody Wants to Rule the World", and "Shiny Happy People". Unlocking every item in the gallery will earn the "Museum Curator" Achievement/Trophy.

An additional tear, a puddle of water, will appear near the phonographs once all 60 waves of the game are completed at least once. Activating the tear reveals a Thuggish Splicer that automatically attacks Booker, sending the game back to the main menu. Reloading the game allows the museum and its exhibits to be viewed at leisure, so long as the puddle tear is left alone. Once this tear appears, however, visitors will no longer be seen viewing the exhibits. 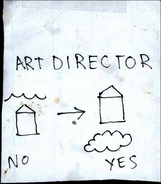