Following the untimely murder of Lady Comstock, The First Lady was constructed and set aloft. Just as the floating city crisscrosses the United States, the zeppelin encircles Columbia serving as a mobile museum to keep Lady Comstock's memory alive in the minds of the citizens. The ship docks at the First Lady's Aerodrome in Soldier's Field and takes paying customers on aerial tours of the city. Filmmaker William R. Foreman produced a short actuality film about the airship in 1909, titled "The First Lady", his 64th of the sort.[1]

There were two variants of the airship — The First Lady Mk. 1 and The First Lady Mk. 2. The Mark 1 was originally held aloft by hydrogen, and was easily shot down by a Vox sniper during an assassination attempt on Zachary Hale Comstock; Father Comstock was not onboard at the time, however. After this incident, the Mark 2 was created. Unlike the Mark 1, the Mark 2 is held aloft by a quantum particle generator.[2] This would all ultimately prove unnecessary, as Comstock eventually began to travel in modified a Security Zeppelin and the Hand of the Prophet.

Named for and embellished with images of Lady Comstock, the airship is of an average size and its interior is lushly decorated with gold and burgundy finishes. The ship has a small museum in its back with the first lady's mementos kept on display, including her trademark blue dress.

A large portrait of Lady Comstock adorns the airship's side. Two-high caliber gun turrets are mounted to the hull to defend the airship, so that it may fulfill its role without escort. The tail and wings of the airship have also been shortened and airfoils streamlined, which likely makes the airship faster and more aesthetically appealing. It uses a Quantum Particle Generator, which keeps it aloft. Like many zeppelins in Columbia, The First Lady is capable of navigating longitude and latitude automatically. It also constantly keeps its engines running, even when docked. Unlike most zeppelins used for civilian purposes, The First Lady carries a pair of cannon in a turret on the underside of the gondola.

For Booker and Elizabeth, The First Lady represents a first-class ticket out of Columbia. The vessel's superior design makes it stronger, faster, and safer to travel in than an open hovercraft, so it's their best option for escape.

The First Lady is first seen flying above Battleship Bay. Booker notices a poster advertising tours through the airship and speculates that he and Elizabeth could use The First Lady to leave Columbia. Booker motivates Elizabeth to follow him by saying that the airship is heading to Paris, neglecting to inform her that it must be stolen first.

When Booker sets a course, he does so for New York rather than Paris. Elizabeth recognizes the coordinates immediately and confronts Booker, and begins crying when he admits the truth. When Booker tries to console her, she hits him in the head with a wrench, rendering him unconscious. Before Elizabeth can fly The First Lady to Paris, the ship is surrounded by Vox Populi gunships. Elizabeth leaves an unconscious Booker in the airship and flees before the Vox arrive.

Daisy Fitzroy and several other Vox Populi members board the airship and commandeer it as a mobile medical bay. When Booker regains consciousness, Daisy attempts to recruit him to the Vox's side, but he tries to stay neutral. Instead, she bargains with him in exchange for the airship. She makes him go to Finkton to retrieve munitions for the Vox after tossing him out of the craft.

The First Lady is seen again in the second alternate reality to which Booker and Elizabeth travel, wherein the Vox revolution is underway. There, it is being used by Daisy to make a speech to her followers, even replacing the image of Lady Comstock with a projection of Daisy's face. When Booker comes to retrieve the airship, Daisy accuses him of being an impostor (or a ghost), having witnessed the death of her universe's Booker DeWitt. Daisy reacts by commanding her followers to kill Booker and Elizabeth.

The two find Daisy and the airship on top of the Finkton Factory. After a confrontation resulting in Elizabeth stabbing Daisy to death, the traumatized young woman quickly boards The First Lady and retreats into the cabin. Booker tries to comfort her, but she refuses to answer. Later, she reemerges having shed her bloody, torn clothes, trimmed her bloodstained hair, and changed into Lady Comstock's iconic dress. Booker sets a random course and the airship takes off, only for a statue on the ship to summon Songbird.

While Booker and Elizabeth try to make the airship go faster, Songbird attacks and crashes the zeppelin in Emporia in Port Prosperity, where its envelope burns to a skeleton. There it finally comes to rest, damaged beyond repair.

Elizabeth, now in Rapture, must return to Columbia to get a Lutece Particle for Atlas in order to save Sally. She fixes a Lutece Device found in the Silver Fin Restaurant and enters Columbia where she finds herself in the small exhibition room in The First Lady's stern. She heads for the airship's bridge, but realizes that there is only trouble that way. Instead, she notices a lift to the top of the aircraft where she can get the Lutece Particle.

When Elizabeth tries to go back to Rapture, Dr. Yi Suchong denies her access and instead instructs her to get a hair sample for him. With this objective in mind, she enters through the doors to the rest of the aircraft just as a distant explosion shakes the ship. Booker point out that they must have arrived during the Vox Populi's siege, just moments before the Elizabeth and Booker from BioShock Infinite will enter the ship. Elizabeth finds a new Vigor, Ironsides and then leaves the ship.

After getting the hair sample, she returns to The First Lady only to see it sail away, with Booker and herself inside. Shortly after disappearing from sight, the Songbird can be heard, attacking the airship. Luckily the Tear is still in place at the dock and Suchong lets her return.

Concept art for the stern and gun turret. 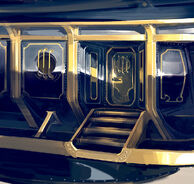 Detail concept for the ship's entrance.

Concept art for the gun turret.

Concept art of The First Lady.

The front of The First Lady.

The flight deck of The First Lady.

The Vox Populi take over the airship.

The Whistler statue to the right.

The Songbird brings down The First Lady.

The decapitated First Lady figurehead at the crash site.