BioShock Wiki
Register
Don't have an account?
Sign In
Advertisement
in: Spoilers, The Founders Party, BioShock Infinite,
and 2 more

The Founders are a major citizen faction and political party in the city of Columbia. Their name relates to the fact that they see themselves as the true founders of the city, and they attempt to model their ideals after the Founding Fathers of the United States.[1] The party promotes ultra-nationalism, religious zealotry in the divinity of Father Zachary Hale Comstock, jingoism, militarism, elitism, white supremacy and extreme xenophobia, and is at war with the anarcho-communist resistance group known as the Vox Populi. Central to their ideology is the belief that Elizabeth will lead them to an apocalyptic cleansing of the "Sodom below," remaking it to Columbia's image. They also believe that a "False Shepherd" will attempt to lead her astray. Columbia's police force and military are both aligned with the Founders.

In 1890, Booker DeWitt distinguished himself at the Battle of Wounded Knee by scalping and burning alive a large number of Native Americans; thus earning the nickname "The White Injun". While Booker was seen as a hero among his fellow soldiers, he was personally disgusted with himself. He then sought to be baptized to start a new life. In one universe, Booker rejected this baptism. In another, he accepted and renamed himself Zachary Hale Comstock. Comstock, now a born again Christian, also had a good political reputation for his service at Wounded Knee. Between 1891 and 1893, he convinced Congress to fund the construction of his visionary city of Columbia. With the support of Washington and Rosalind Lutece's floating atom theory to levitate it, Columbia would officially launch in 1893.

Comstock, with a growing ego, political power, and public persona, spawned a personality cult of pseudo-Protestant Christianity and patriotism by declaring himself a prophet and claiming an angel named Columbia had given him the vision of the city and its purpose as a "New Eden". He cemented his followers' devotion through the use of Tears. Using the Lutece Device, he would look into another dimension and see a future outcome. Comstock would then make a prophecy, and when it occurred the astonished citizens were fooled into worshipping him. He claimed that the Founding Fathers George Washington, Thomas Jefferson, and Benjamin Franklin were saints in the angel Columbia's eyes who were set to establish America above all over nations in an extreme and aggressive interpretation of American Exceptionalism, and that Columbia is destined to succeed them as the only bastion of "True America" in the world. In honor of this, his followers named themselves the Founders.

In addition to their fervent devotion to Father Comstock and his teachings, the Founders also embraced his extreme beliefs, most notably aggressive white supremacy and classism. White, middle-to-upper class Protestant citizens had access to all of the city's privileges including its advanced technology, political power, and clandestine neighborhoods while its minorities were segregated into slums such as Shantytown. This underclass generally only appeared in proximity to the Founders' population in positions of servitude, such as maids, valets, and janitors. Various forms of propaganda reinforced this class and racial division. History was rewritten from the Founders' viewpoint to justify Comstock's ideology and his seizing control of the city. This included the events of Columbia taking part in crushing the Boxer Rebellion in China, and Comstock's decision for Columbia to secede from the United States. Children were indoctrinated into these beliefs through Duke and Dimwit and were encouraged to enter the city's military force at a young age via propaganda presented in Soldier's Field and other venues. Due to their xenophobia over the "foreign hordes" destroying their way of life, any attempts of integration were both illegal and highly dangerous.

Despite their radical ideology, the Founders embraced their women's equality, allowing female members to join the city's militia, army, and police force. They were progressive in adopting advanced technology, namely the city's quantum-based levitation system and the body-warping Vigors. Rosalind Lutece, a brilliant female scientist, was still not exempt from sexist jokes, but she was still largely respected as the most eminent scientist in all of Columbia. Elizabeth, following the passing of Father Comstock, was expected to lead Columbia and deal with the world below.

The Founders, aside from being a political party, have different branches ranging from manufacturing conglomerates to cults and militants. The main manufacturing and goods-producing company in Columbia, Fink Manufacturing, is a Founder-owned company. The Fraternal Order of the Raven is a shadowy sect dedicated to enforcing Founder beliefs in racial purity. The city's police force and military are headed by the Founders, and much of Columbia's children's entertainment and education was run by the political party as well.

For 1912, Columbia's military and police forces are forward-thinking as far as sexual equality is concerned. Women are allowed to serve in frontline duty alongside men and to reach ranks at least as high as commissioned officers. The military standard issues both semi and fully automatic weapons to their troops. Many of these weapons are not available to those on the surface as the technology for them was acquired from the observation of Tears.

The Founders' primary recruitment source is Columbia's White Protestants. The Founders are supported by the majority of Columbia's middle and upper-class citizens, with the affluent district of Emporia being the center of their power. The party's leaders are all extremely wealthy and are supported by Columbia's business elite. One, Jeremiah Fink, is allegedly the wealthiest man in the city. The Founders indoctrinate Columbia's young to create future loyal supporters, and recruit them into the police and army to uphold the Founder ideology. Elaborate propaganda pieces, such as Soldier's Field, are employed for this purpose, as are news media, radio, posters, and the ubiquitous kinetoscopes that peddled the Founders' beliefs to the viewing public.

The Founders' ideology heavily incorporates symbolism, most of it associated with the United States' Founding Fathers and appropriations of Christianity. The city's three main symbols are as follows:

Other factions and individuals within the Founders also developed symbols of their own: for example, the Fraternal Order of the Raven, tasked with avenging Lady Comstock, worship the raven (so that they may watch over the city) and the coffin (for their self-perceived failure to protect Lady Comstock) alongside the Sword. Jeremiah Fink splits society into lions (the elite), cattle (workers), and hyenas (dissidents), going so far as decorating his Beast contingent's armor with golden lion heads.

In addition to these symbols, the Founders also worship certain individuals, most notably Father Comstock, their leader, whom they see as a divine prophet. Lady Comstock is seen as a saint, especially following her death. Elizabeth is worshiped as the Lamb of Columbia and is Comstock's planned successor. Elizabeth's jailor Songbird is viewed as a guardian of the city. Even Monument Island, where Elizabeth is initially held captive and is a colossal statue of the Angel Columbia, is held to be almost sacred, which causes great distress among the population when it is partially destroyed. Angelic statuary is found all over Columbia, usually bearing symbols of the Founders or holding up quotes from Comstock's sermons. Conversely, figures opposed to Comstock are demonized: Daisy Fitzroy and the Vox Populi are associated with the Devil, whereas Booker is hunted down for being the False Shepherd, a figure who Comstock prophesied would arrive to corrupt Elizabeth. Abraham Lincoln is vilified because of his acts against the Founders' racial beliefs whereas his killer John Wilkes Booth is sainted by the city.

The Fall of the Founders[]

Fiercely convinced of their righteousness, the Founders did not hesitate to stamp out any form of ideological dissidence. Romantic or sexual relations between white and black people were punishable by death (and, once a year, turned into a public stoning), and supporters of worker's rights were hunted down and either ostracized or jailed. Thus, when the Vox Populi movement surfaced after the purported murder of Lady Comstock by Daisy Fitzroy, a maid working at Comstock House and both creator and leader of the Vox, the Founders declared war against them, forcing the rebel movement underground and to resort to violence. A more extreme and racist branch of the Founders, the Fraternal Order of the Raven, tasked themselves with the assassination of Vox Populi members, and above all, Fitzroy.

Initially, the Founders held the upper hand, with their control of law enforcement and support from Fink Manufacturing, possessing economic and technological supremacy over the rebels. Since the Vox Populi had little access to weapons, they were forced underground, and could only make limited attacks against the Founders and their supporters. Booker DeWitt and Elizabeth pass through a Tear into a reality where the Vox gained access to weapons made by a gunsmith by the name of Chen Lin via Booker sacrificing himself for the revolution. This allowed the Vox to cripple the Factory district and spread their control to the rest of the city, murdering any Founders they came across. Many surviving citizens were forced to flee the city, with those staying to fight being forced back to Comstock House. Eventually, the Vox in that universe took over Columbia, burning much of it down.

Members of the Founders[]

A warning from The Founders to alert people of Vox Populi vandalism.

Portrait of a Founder #1.

A soldier on a hovercraft with a turret behind him. 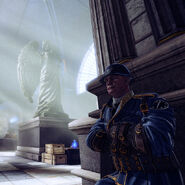 A Founder soldier in the gateway to Monument Island.

A Beast loyal to the Founders.

Members of the Columbian police force.

Founder Soldiers being attacked by Murder of Crows.

Soldiers setting up a blockade.

One of Columbia's finest soldiers.

The massacre of the Founders, following the death of Daisy Fitzroy.