The Promenade is a large passageway and one of the central hubs of Dionysus Park in Rapture. Subject Delta is required to pass through here during the events of BioShock 2.

Connecting many of the areas in Dionysus Park, The Promenade was an artfully decorated passageway. The Promenade boasted a piano bar that was a popular area among Park visitors. The facility suffered severe water damage following the flood, and the floors became covered in sand.

This area connects the Gallery Entrance, the Chase Carousel, the Imago Fine Arts and the J. Fischer Gallery. In the eastern section, there are two small rooms, one of which leads to the Gallery Entrance and the other contains a Bot Shutdown Panel. These rooms had wine tasting tables set up for parties. Beyond the smaller rooms is the main passageway of The Promenade.

When Subject Delta first enters this area from the Gallery Entrance, a Houdini Splicer is seen attacking a Leadhead Splicer. The Leadhead will quickly burn to death, and the Houdini will relax by the Gene Bank. The entrance to the Carousel has been rusted shut, but upon approaching the doors, a couple of Splicers will use a cutting torch to unseal it. Beyond this is a large corridor that leads to the Imago Fine Arts and J. Fischer Galleries where a Circus of Values, a Little Sister Vent, and an ADAM Corpse are located.

The Piano Bar was a relaxing bar and lounge located in the Promenade where guests would sample Tate Merlot while listening to music. The bar had several seating areas and was adorned with several paintings, but now is in sorry shape. In the lounge, there is a grand piano and an El Ammo Bandito. An ADAM corpse lies in the bar area and a Big Sister will appear in front of the window to menace the player before swimming away.

The Piano Bar located in The Promenade.

The entrance to the Piano Bar from the galleries.

Another view of the galleries.

This Splicer lies in wait for trespassers. 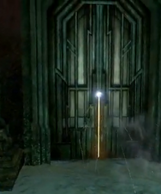 That's one way to make an entrance.

A soiled banner from the grand opening.