“ADAM twists the genes, the body, the mind… even the soul. In desperation, I turned to ADAM's most innocent victims, the Little Sisters. With you as their protector, they may put a stop to this madness.”
― Brigid Tenenbaum[src]

“You receive the call: Tenenbaum desperately needs you to steal as much ADAM as possible, to help thwart Sofia Lamb's insane plan. Enter the Protector Trials: frantic combat challenges designed to push your mastery of weapons and Plasmids to the limit. The goal in each Trial is simple: get your Little Sister to an ADAM-rich corpse and keep her safe while she gathers precious ADAM. Opposition mounts as your Little Sister nears her goal -- will you survive the onslaught? Each Trial features three unique weapon and Plasmid load-outs, keeping the challenge fresh, as well as a fourth bonus load-out the player receives when all previous load-outs are completed.”
― Official description

Unlike the main story of BioShock 2, the player does not take the role of Subject Delta but controls another Alpha Series Big Daddy taken out of hibernation by Brigid Tenenbaum just before the events of BioShock 2. She wants the Alpha Series to take ADAM away from Sofia Lamb in an attempt to foil her plans.[1]

Each challenge requires the player to protect a Little Sister while she drains ADAM from a corpse using a specific set of weapons, Plasmids and Gene Tonics unique to every trial. Each level has three trials which can earn the player one, two or three stars for completing them, with a corresponding difficulty level. Earning stars unlocks new trials for the player to complete, and new unlocked concept arts or movies in the gallery. All difficulty levels on all stages must be completed to unlock the 36 star total.

For strategies for specific trials, see the individual level articles.

Obtaining all stars, which means simply completing all the trials regardless of grades, will unlock the Master Protector Gene Tonic in Minerva's Den, the second single player downloadable content for BioShock 2. That Tonic, which increases the amount of ADAM Little Sisters harvest from corpses by forty, can be acquired at any Gatherer's Gardens in this additional content without any in-game cost. Also, concept art related to this extension can be unlocked too. 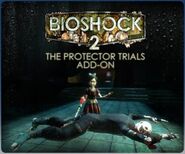 Amazon.com promo for The Protector Trials add-on for PS3.

Banner for The Protector Trials on Games for Windows Live.

The trial selection menu of the first map.

The trial selection menu with all bonus contents unlocked.

The player fires bees at an enemy.

Using a fully upgraded Shotgun against a Splicer in the Adonis Baths.

The player Drills a Brute.