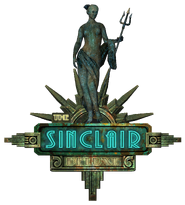 “If a smart fella' wanted to talk some bankrupt fat cat into moving to a slum, he'd call the place a "hotel overnightly."”
― Augustus Sinclair[src]

The Sinclair Deluxe was a hotel run by Augustus Sinclair in Pauper's Drop, providing affordable low-end housing. Subject Delta is required to go here to get the Atlantic Express Override Key from Grace Holloway.

Following the Rapture Bank Crash, some citizens were left in a very poor financial situation. Even when the people offering welfare charities, Sofia Lamb and Frank Fontaine, weren't yet in prison or dead, Rapture's ruined and unfortunate masses had few options, and had to resort to cheap housing. The Sinclair Deluxe had been built by Augustus Sinclair for that exact purpose — an inexpensive "hotel" constructed to cater to the working poor and others left behind in Rapture's competitive society. The hotel was little better than the rest of Pauper's Drop; even Sinclair himself called the place a "slum"[1] and its rooms "ratholes".[2]

In an audio diary, Sinclair alluded to the various ways he profited from his tenants. One of these methods was by offering them discounts at his liquor stores, thus fueling their alcoholism and draining their pockets, ensuring that they would remain in his establishment. After the civil war, when Lamb began to gain control of Rapture, Grace Holloway, with the help of the Rapture Family's Splicers and the other tenants, kicked Sinclair out and took control of the hotel and the surrounding district. The building's state deteriorated over the years due to a lack of maintenance under the Rapture Family's management.

The building itself has four stories, although only three of them have accessible rooms. Grace Holloway's room is on the top floor. The rooms, apart from the penthouse suite, all look similar, with a bathroom and combined kitchen, living room, and sleeping quarters.

Citizens who have called the Sinclair Deluxe home include:

Subject Delta proceeds to the Sinclair Deluxe to get Grace Holloway's Genetic Key, as it is the only way to lift the transportation lockdown through Pauper's Drop. As Delta goes further into the building, he observes the damaged and decrepit condition in which the lodgers live. Some were killed by caved-in ceilings, others ended their misery themselves (one resident hanged himself, another used a shotgun while on the phone), and many are still prowling about the place.

The check-in station is located at the frontmost part of the hotel, and has an adjacent mailbox and Pneumo area. Further ahead is a Fuel Station, likely a profitable convenience for construction workers who live in the Sinclair Deluxe. As Delta approaches the lobby, a Brute Splicer lobs an oil drum at the entryway, sending a pile of debris crashing down, blocking the way in. Delta is tasked with finding and using a Research Camera on another Brute Splicer to acquire the Drill Dash ability to clear this obstacle.

The Deluxe's centerpiece is a large, open atrium. An elevator connects the multiple stories, but Delta is unable to use it. When Delta breaks through the blocked entrance way using Drill Dash, a group of Splicers are waiting to give him a proper greeting. An ADAM corpse is located on the ground floor in the center of the space. If the Little Sisters gather within the hotel, Grace sings "When You're Down and Out" over the loudspeaker.

Most of the rooms on the first floor are inaccessible by locked doors or rubble. Subject Delta must proceed down a long dark hallway scattered with corpses. In room 115, a Splicer is seen trying to open a safe while another one waits around the corner. After Delta explores the room, another Splicer playing dead outside the room attacks him. A fallen ceiling prevents Delta from moving further down the hallway, so he passes through room 118 and spots a shadowy figure darting just out of view as he proceeds. Delta follows the fleeing shadow along a winding path through several apartments. Further on, a trio of Thuggish Splicers, also playing dead, attempt to ambush Delta.

Advancing back out into a hallway, a Machine Gun Turret around a corner guards the rightmost hallway which leads to a Power to the People station. To the left, a Security Camera next to a Little Sister Vent overlooks a Freezing Drill tonic next to a corpse altar. Picking up the tonic triggers an attack from a group of Splicers. Grace proclaims the futility of Delta's efforts and the solidarity of the Rapture Family as he continues up to the next floor.

More rooms are accessible on the second floor. It's evident the upper floors were the site of serious battles during the ten years, judging by all the barricades and damage. Walls between rooms 211, 213, and 215 have been knocked open, allowing multiple paths to gather the collectibles in each decrepit apartment.

Room 215 contains four rooms that have been completely ransacked. The kitchen has been converted in to a small photography studio, with several photos hanging on the wall and on lines in the room. The stove, fridge and kitchen counters have been moved aside to make room for the photographic equipment. A large hole in the wall leads to room 213. The bedroom has a single bed with a female corpse upon it. She most likely died from the roof collapsing on her, judging by the large hole above and debris on her. Beside her is a cage with a cat, which must have expired shortly after its owner was killed. The bathroom has two holes in the wall, one of which leads to room 213.

Room 213 was most likely the home the Parson family, judging by the audio diary found here. The furniture in the living room has been stacked to form a barricade. There's a Big Daddy doll in the kitchen with a screwdriver through it. In the bedroom is a turret, guarding a safe. The bathroom has a large hole connecting to the next apartment.

An ADAM corpse clutching a small camera is found in the living room of room 211 (most likely the owner of the small photography studio in room 215). The kitchen to the left contains several tanks of gas and a remote hack dart. A leak from a gas pipe on the ceiling is aflame. The bedroom is barricaded with a stack of pillows and sandbags.

As soon as Delta rounds the far corner, a Brute Splicer comes charging out from room 212, sending crates and other objects flying. After dealing with the Brute, Delta can climb the collapsed ceiling up to the top floor. The apartment itself was owned by Gideon Wyborn, a member of the Rapture Family who bred the cult's iconic Blue Morpho Butterflies. His room has several pinned butterfly collections framed on the wall and wire cages for butterflies to live in. A remote hack dart can be found here.

Emerging out of room 312, Delta encounters a Security Camera and a lone Splicer guarding the hall to the Atrium. The majority of the third floor is blocked off. Delta proceeds to Grace's penthouse apartment, room 307, passing room 306, which is locked. Grace's apartment is quite comfortable when compared to the rest of the building, and Eleanor's old room remains untouched, even years after her kidnapping. A Keen Observer Tonic can be found in Eleanor's room. Grace awaits Delta in a panic room accessible via a switch panel hidden behind a poster. Whether Delta's decision is to kill Grace or spare her, he gains the Override Key and leaves the penthouse. Room 306 is now open, the holes in its floors offer Delta a shortcut path rather than going back down the way he came.

As Delta emerges out of room 106, a pack of Splicers take the elevator down to the bottom floor for a final confrontation. The fighting continues when a Splicer preps a Machine Gun Turret in the entrance hall. The final opposition is a pair of Splicers at the Sinclair Deluxe's entrance, and two more just out through the connecting tunnel. Delta finishes them off and leaves the hotel for the Atlantic Express station.

An early version of the Atrium, featuring a play ground.

This message can be found scrawled onto the floor in the lobby.

Central atrium of The Sinclair Deluxe.

The kind of welcome message Subject Delta would expect to find.

More butterflies, both real and decorative, can be seen above the leaking glass ceiling.

Sometimes, a corpse may not be a corpse around the building.

Why take the elevator, when citizens can also climb up dilapidated floors around The Sinclair Deluxe.

One of the many long hallways of The Sinclair Deluxe.

Inside the artist's studio.

The room of Gideon Wyborn.