For the level of the same name, see The Thinker (Level).

The Thinker is the nickname of the Rapture Operational Data Interpreter Network (R.O.D.I.N.),[1] the mainframe computer invented by Charles Milton Porter to process all of the automation in Rapture.

When Charles Milton Porter arrived in Rapture, invited by Andrew Ryan, he founded Rapture Central Computing, the source of computerization in Rapture,[1] with Reed Wahl.[2] Computers were built to facilitate research, business and to control various workings and functions of the city's infrastructure, effectively thinking for the citizens.[1] Trying to surpass Alan Turing, whom he had worked with on the surface, Porter worked to create The Thinker to achieve artificial Intelligence.[3] Using the technologies Rapture had to offer, and harnessing the power of ADAM,[4] he created a computer which could process data at "the speed of thought".[1] With the completion of the Independent Reasoning Processor, he finally created an artificial intelligence. The machine was eventually nicknamed after both the statue of The Thinker Porter brought from the surface to display at the Den and its acronym.[5]

While Wahl used The Thinker to predict scores of ballgames and stock prices, Porter tried to replicate the mind of his dead wife Pearl,[6] who had been killed during London's WW2 bombings.[7] Porter fed The Thinker with records of his wife, trying to recreate her personality in the computer and duplicate her voice. Wahl, influenced by splicing, imagined the computer as a way to predict everything with an algorithm — a "crystalline equation which determines ALL".[8] The two partners began a conflict for The Thinker's purpose. Using the growing tensions of Rapture, Wahl created false evidence of Porter's allegiance to Frank Fontaine, resulting in Porter being incarcerated in Persephone. Wahl was then put in control of Rapture Central Computing by Ryan.[9] Wahl later cut the Minerva's Den district off from the rest of the city, so as to remain the sole user of The Thinker. During the Civil War, the computer was assigned to control a majority of Rapture's security systems.

In the Minerva's Den DLC, Charles Milton Porter allies himself with Brigid Tenenbaum and Subject Sigma to get The Thinker out of Rapture to find a cure for splicing. To do so, Sigma must defeat Reed Wahl and take control of The Thinker away from him, take its codes and allow the rebuilding of the computer on the surface. As Sigma progresses through Minerva's Den, Wahl uses The Thinker against him, freezing the entrance to the computer's core. Wahl claims that he can predict Sigma's every move. When Sigma finally reaches the core, Wahl realizes The Thinker has been working against him, and shuts it down before attacking Sigma. After Wahl is killed, Tenenbaum tells Sigma to take the Administrator Punchcard from Wahl's body and re-activate The Thinker, preventing Rapture's remaining automated systems from collapsing. The Thinker then reveals that Subject Sigma is, in fact, Charles Milton Porter himself. The Porter that had been communicating with Sigma was The Thinker using its personality duplication system to replicate Porter's persona. The Thinker had concealed its true identity and motivations from Reed Wahl, and provided Sigma with a familiar face and voice to facilitate communication. After reactivating the Thinker, Porter prints out its codes and heads to the surface with Tenenbaum. Porter is shown restored and visiting his dead wife's grave. 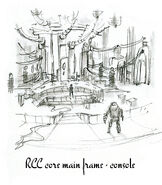 Concept art for The Thinker.

Development image of The Thinker's model.

An example blank punch card of The Thinker's output featuring retrieval and update numbers and a place for Status Update messages.

The Thinker's serial number seen on the right of the machine.

The Thinker's Main Console seen in the game trailer.
Add an image to this gallery

The Thinker's electrical wiring and deactivation.

The equations written all over the place.
Add an image to this gallery

Retrieved from "https://bioshock.fandom.com/wiki/The_Thinker_(Computer)?oldid=319092"
Community content is available under CC-BY-SA unless otherwise noted.