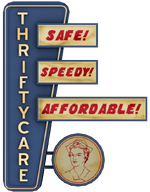 Thrifty Care is a small medical business in Rapture that was given a grade 2 quality rating from the Rapture Medical Group.

Although never seen by Jack, the Thrifty Care was mentioned by Dieter Sonnekalb, who reveals that it sold Med Hypos.[1] A photograph of the business marquee can be found in a newspaper clipping

A Thrifty Care operated alongside Kure-All in the Adonis Luxury Resort, offering small scaled medical assistance to the resorts guests.

In the Multiplayer version of the Medical Pavilion, the business is advertised above the right hallway's ceiling window.

Thrifty Care, as it originally appeared in a prelaunch version of BioShock.

A part of the Thrifty Care sign, originally seen in a prelaunch version of BioShock. 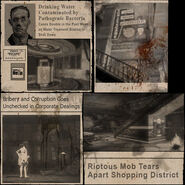 Thrifty Care operated alongside Kure-All in Adonis Luxury Resort.
Add an image to this gallery

Retrieved from "https://bioshock.fandom.com/wiki/Thrifty_Care?oldid=320744"
Community content is available under CC-BY-SA unless otherwise noted.